Often overlooked by tourists, Piacenza is an absolutely charming city. Located in Northern Italy, in the province of the same name, in the Emilia-Romagna region. It is bursting with things to see and appreciate. Literally, it means ‘the place that pleases’ and I found this city to be very pleasant indeed.

Situated between Milan, Parma, Verona and Genoa, a perfect stop-over when driving in Italy is to see Piacenza. Which is exactly what we did during our recent Italian road trip.

Here I will give you some of the highlights you should see when visiting this small but delightful gem. I spent a day here exploring. But you could easily spend more than a day here seeing all the attractions Piacenza has to offer.

As with all Italian towns and cities, the primary features are the cathedrals and palaces. And Piacenza has its share of gorgeous historic architecture to see and admire. Stunning buildings grace the piazzas and streets in spades.

Piacenza is especially known for having dozens of churches. Hence why it is sometimes called the ‘city of churches’. However, some no longer operate and have been converted for other uses.

The Duomo di Piacenza is the main cathedral of Piacenza, and a great place to start your visit. It was completed in 1233. I love the Romanesque style architecture. The facade is adorned with beautiful Veronese pink marble, which was popular in many Italian buildings at the time. The interior has huge columns, and Renaissance frescoes are painted in the dome. It is situated in the Piazza Duomo square.

Square of Horses in Piacenza

The main square in Piacenza is called Piazza dei Cavalli (horses). Here you will see 2 lovely bronze equestrian statues of famous Italian notables who hated each other apparently. But the focal point in the piazza for me is the gothic building, aptly named Il Palazzo Gotico.

The Palazzo Gotico which dates from the 13th century is now the municipal building of the city of Piacenza.

It is quite unique in appearance. I love the contrast of the two levels. You can see that the lower portico is made of pink marble with pointed arches. Meanwhile, the upper level is of red brick with round arches. Then on top there are the classic castle features of archer crenellations.

In the same Piazza Cavalli you will find a gothic Italian church. It was named after Saint Francis of Assisi and was built in the 1200’s. With a very dark facade, I think it actually looks a bit ominous. However, it is of significant historical importance to the city of Piacenza. Why? Well this was the place of the official signing to join the new kingdom of Italy.

If you love theatres, you will enjoy seeing this one. Because it is a beautiful miniature version of Milan’s famous theatre, Teatro alla Scala. The Municipal Theatre of Piacenza was built in the 18th century. You can see operas, ballet and concerts here. Inside it is lavishly decorated in gold and red velvet. It is stunning.

This is another beautiful Romanesque basilica. There are frescoes painted on the inside and other artwork to check out, if you love historic art. You will notice it has a tall eight-sided tower. A very interesting feature that stands out on the city landscape.

This palace used to be the home of the Duke of Parma & Piacenza. In my opinion, not one of the most beautiful palaces I’ve seen. This is probably because it wasn’t fully completed to the original design plans. It is missing some architectural features, including a facade with arches and a tower. Various problems lead to its unfinished state.

You can visit the Palace Museums here, Musei Civicito, to see the historic art collections on display. The most important piece of art is the painting by Botticelli, “Madonna adoring the Child with St John the Baptist” from the 1400’s.

In the lower lever, there is a splendid Carriage Museum. How cool is that! The authentic pieces have been beautifully maintained over the years.

One of my favourite things to do as a traveller is to stroll around the streets of a city. It truly is the best way to explore and discover hidden gems. And Piacenza is perfect for doing just that. It’s very easy to get around on foot. So, take the time to wander around these delightful streets and lanes. It’s magical.

And, of course, if you want some retail therapy, head to Via XX Settembre. This is Piacenza’s main shopping strip, connecting the two main piazzas that I mentioned earlier.

We all get a bit peckish when touring around, right? And your appetite for Italian food will certainly be well catered for here. You cannot visit Piacenza without sampling some of the delicacies. After all, Piacenza is part of the Emilia-Romagna food valley which is the gastronomic epicentre of Italy.

You might want to sample the local Pasta dish from Piacenza. Tortelli con la coda are delicious.

Cured meats, such as salami and pancetta, are the specialty here. The charcuterie choices available are endless.

The world famous Grana Padana cheese comes from Piacenza. This is Parmiggiano Reggiano’s biggest competition, made nearby in Parma. Personally, I love both of them, but there is a slight difference in taste.

Tomatoes are grown and canned here more than anywhere else in the country apparently.

Finally, wine is made from local grapes in the vineyards of Piacenza and are renowned world wide. The Piacenza Hills, Colli Piacentine, produce both red and white wines. About 20 different varieties are made here. One of the most popular reds is Gutturnio.

Snazzy Tip: If you happen to be in the area early June, I recommend you check out the Gola Gola Summer Food Festival in Piacenza. A fabulous 3 day food and cultural celebration.

Other Snazzy facts about Piacenza

Tours of the region I recommend

There you have it. You should see Piacenza if you get the chance. Make sure to stop by when driving through Italy. You will love it.

Whilst in the area, just a short 45 minute drive in the nearby hills, I visited the medieval castle, Castello di Vigoleno. Be sure to check out the article and read all about my enchanting stay at this beautiful castle and surrounding village.

Please leave any comments below. Have you been to Piacenza? Would you like to visit this part of Italy? 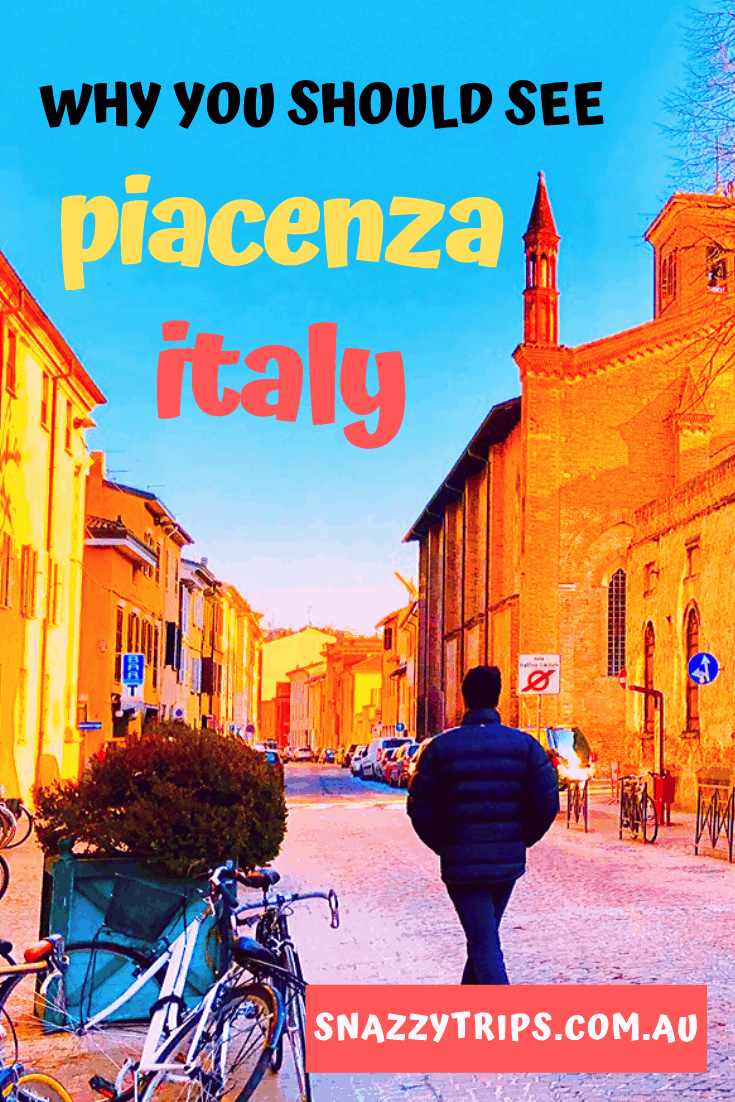 7 thoughts on “Why You Should See Piacenza”