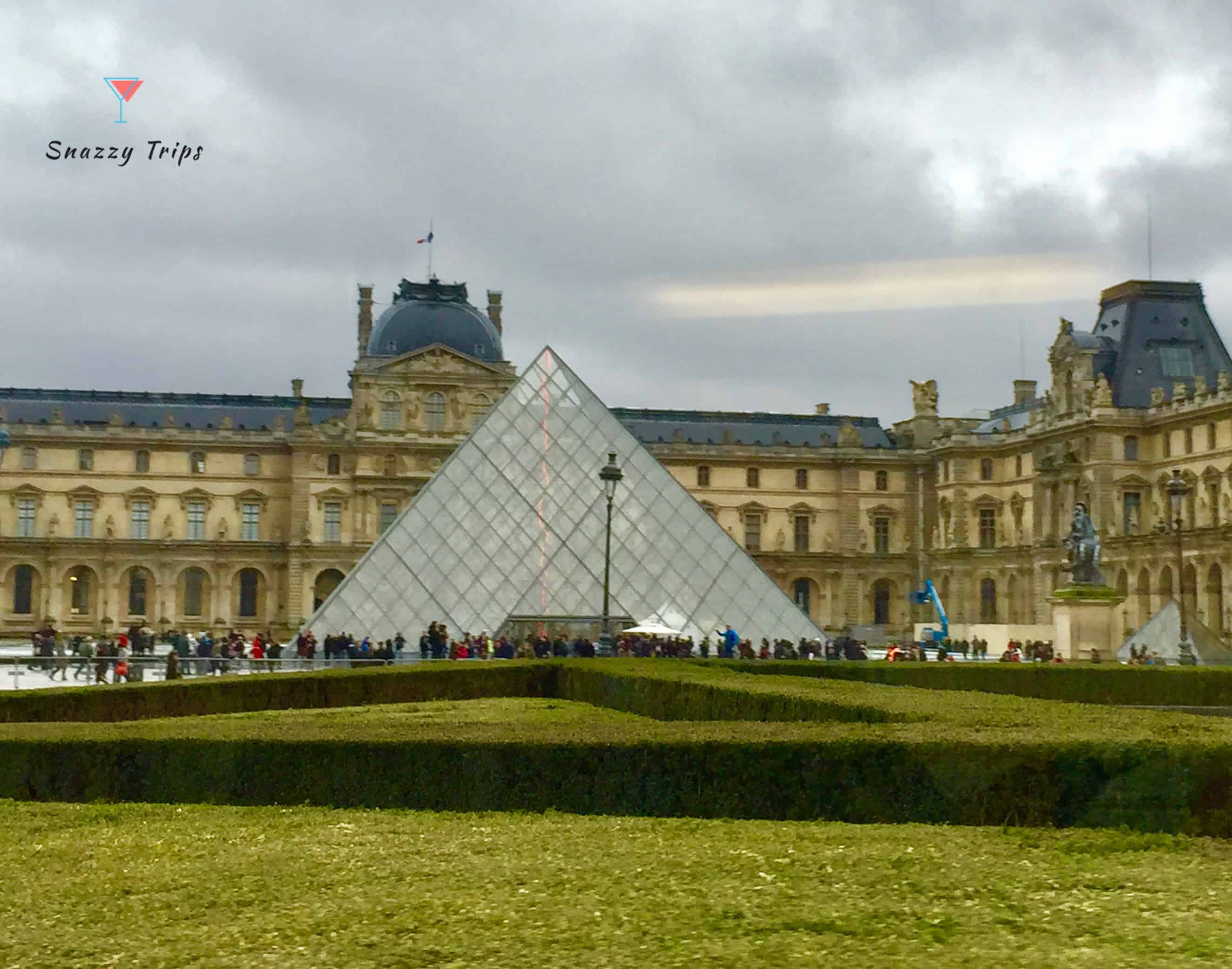 THE MUST-SEE ATTRACTION IN PARIS

The iconic Louvre Museum is a hugely popular tourist attraction in Paris, France. Situated in the heart of this beautiful city, it is the most visited place in Paris after the Eiffel Tower. You really can’t go to Paris without spending at least a few hours at this historic site. Here are a few excellent reasons why you must see the world famous Louvre.

The Louvre Museum used to be a royal palace for the first King of France, Phillip II, and a fortress to protect Paris. The original palace was built in the 12th century. In later centuries it was abandoned, then demolished and finally rebuilt in the Italian Renaissance style as a palace for the royal family in the 1500s up until Louis XIV, who was the last King to call it home. Then the monarchy moved to the Palace of Versailles, in 1682, until the French Revolution when the Louvre Palace was handed over to the government by the imprisoned King (who was subsequently beheaded). In 1793 it opened as a national art gallery and museum. A lot of the artwork on display was confiscated art from the deposed Royal family’s personal collection.

The building itself is jaw droppingly beautiful with elaborate galleries, ornate gold mouldings, arches, frescoes on the ceilings and walls, and heaps more. Some of the rooms are absolutely stunning.

It is a magnificent architectural french monument with a fascinating history, set along the River Seine and next to the Tuileries Park and the other Arc de Triomphe (yes, there are 2).

Be sure to visit the display of the original medieval building in the lower hall.

The mysterious Mona Lisa housed in the Louvre Museum (Denon Wing) is legendary. It is the world’s most famous painting, but not for the reasons you may think – not because of it’s beauty, not because it was painted by Leonardo da Vinci in 1507, not because it’s a Renaissance wonder, not because the eyes follow you around the room, or the perplexing Mona Lisa ‘smile’.

It became famous because it was stolen from the Louvre Museum in 1911, as security was slack in those days. A media circus ensued followed by conspiracy theories that it was all a hoax. It was 2 years before it was found and returned to the Louvre. Nowadays it is the only item at the Louvre kept inside a specially designed climate-controlled box, set in concrete, with thick bullet-proof glass covering it. You aren’t even allowed to get close to it, having to remain behind a barrier. This makes it a tad tricky to take a good selfie with it! Not to mention the haziness and glare from the thick glass protecting it.

At first Pablo Picasso was arrested for stealing it, but then released. The culprit was actually Vincenzo Perugia, an Italian handyman working at the Louvre Museum, who stole the painting under his clothing and took it to Florence by train to try to sell it, or return it to its home country of Italy (the details are sketchy).

The well publicised theft made big news all around the world and made the Mona Lisa famous, as people flocked to see it, once it was restored to the Louvre. Today 8 million people visit the Mona Lisa each year. But art historians don’t wish to credit a two-bit thief with making the piece the big attraction that it is today. It is a combination of events, media attention, speculation about who Mona Lisa actually was, and the fact that it is a fine oil painting by a renaissance master, that have made it the most valuable and popular art piece in the world.

Do you dare guess its value? As of 2018, it was valued at US$830 Million! Maybe France should sell it to pay off their national debt. Just a thought.

Interesting fact: 90% of people visiting the Louvre Museum come to see the Mona Lisa. 15,000 people per day! They want to be able to say ‘I saw it’. Like a spiritual journey to a shrine.

As the most visited and the most valuable item, this 500 year old money spinner is truly a national treasure. But I’m shocked to learn it is not insured! Why? I hear you ask. Apparently because it would cost a ridiculous amount in premiums, and also it is owned by the state and you don’t take out insurance against yourself!

Personally, I think all the hype is way too much. Sorry. I was expecting something more impressive and grandiose. When I saw it, I was a little disappointed. Firstly, it is tiny, only 77cm x 53 cm, you can barely see it from the other side of the room; secondly, it’s not particularly attractive; thirdly, it’s painted on wood, not canvas (which is strange considering canvas was available in those days). There are many far more beautiful paintings in the Paris Louvre that actually take your breath away. But art, like beauty, is in the eye of the beholder.

Speculation and controversy has plagued this masterpiece for centuries. Many have questioned whether it is really even a woman? Is it a self-portrait of Leonardo himself? Is it his male lover? Or is it indeed a portrait of an Italian aristocratic woman from Florence named Lisa Gherardini, whose husband Francesco del Giocondo ordered the painting, as thought? We will never know for certain. And the fascination and intrigue continues.

Interesting fact: There is a minuscule ‘LV’ painted in one of the Mona Lisa’s eyes. It could stand for Leonardo da Vinci (or Louis Vuitton – I’m just kidding).

Interesting fact: (last one, I promise): You won’t believe it but Ms Mona Lisa has her own mailbox for all the love letters she receives. What the …?

The Louvre Museum is the biggest in the world! 15 Acres of galleries in fact, with 8 sections of curated artwork. It is not physically possible to see everything in one day! I tried to see as much as I could, but I know I missed many things and I was very disappointed. It is exhausting navigating this huge labyrinth that is the Paris Louvre and trying to give the art the respect and attention it deserves. So I recommend you try to appreciate it in more than just one visit, if you can.

The world’s biggest art collection is here for you to see, with pieces dating from 800 years BC to the 1800s and incorporates Greek, Roman, Etruscan, Egyptian, Islamic, Eastern and Oriental cultures, including sculptures, paintings, drawings, jewellery, tapestries, pottery and much more. Phew! A staggering 35,000 masterpieces are held here. Can you imaging the dusting? What a nightmare.

Some of the most famous pieces are: Mona Lisa, Winged Victory, Psyche Revived By Cupid’s Kiss, Venus de Milo, Dying Slave, Sleeping Hermaphroditus, San Sebastian, Death of the Virgin, just to name a few. But don’t just aim to see the popular ones, these are usually crowded with people, as there are so many other works of art to admire that are less busy.

The series of 4 modern glass and steel pyramids, one big and 3 small, are displayed outside the entrance in the open courtyard and were built in 1989. An upside down pyramid built in 1993 is inside. People of Paris hated the idea when first proposed, just as they opposed the Eiffel Tower when first designed. Now the pyramids have been embraced as a feature of the Paris scenery. Designed by an American architect, he was the first non-frenchman to contribute to the design of the Paris Louvre Museum.

Lastly, there are ghosts living there! Believe it or not. (Sorry I couldn’t get any photos!) There has long been reports that the Paris Louvre is haunted with ghosts of fallen soldiers and mummies. The Red Man of the Tuilleries Gardens also lingers at the Louvre. He lived in the 1500s, as a henchman of Queen Catherine de Medici, who had him murdered for knowing too many juicy secrets about the royals and then rose from the dead to haunt the royals who lived at the Louvre. This is probably one of the reasons they hated Paris and fled to Versailles, I’m guessing!

My tips for visiting the Paris Louvre

a. With purchase of the Paris Pass you get free fast track entry to the Louvre Museum, which means you don’t have to buy a ticket and you can skip the queue, simply by scanning your Pass. How good is that!

b. Get there early, so you have a full day at least, to browse;

c. There is wi-fi in the museum;

d. Bring a portable battery charger because you will run out of charge if you are there a while and there are no charging points;

e. There are 15 food places – formal, casual and takeaway – at the Louvre and in the Tuilleries Gardens;

f. The Paris Louvre Museum is closed on Tuesdays;

g. Lastly, if you go during the off-peak season (I went in January/February) there is far less crowds, making it so much easier to wander around the museum and take photos without herds of people in the way, blocking your view of the magnificent art.

Tours of the Louvre Museum

Have you been to the Paris Louvre Museum? Let me know your thoughts below.