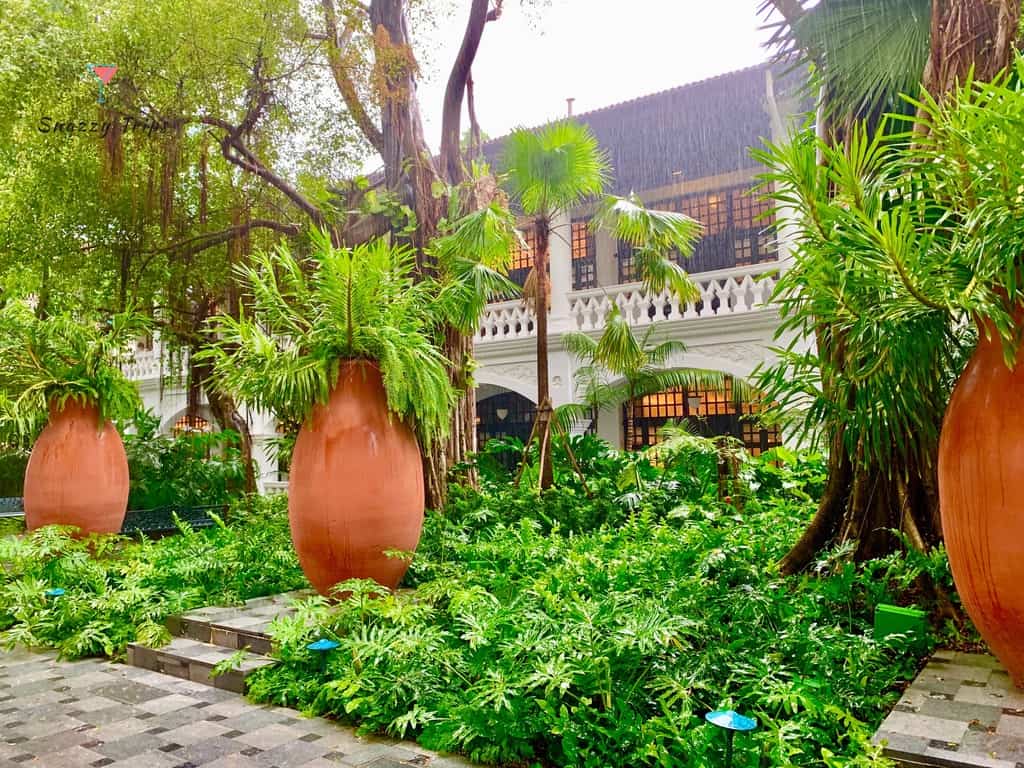 You don’t want to miss the iconic Raffles Hotel in Singapore. Named after the founder of the country, it’s a national treasure, a luxury destination and a popular tourist attraction.

One of the highlights of my recent vacation in Singapore was visiting the iconic Raffles Hotel. I was so excited to finally get to experience the old-world charm of this famous establishment, which is a national monument and a much-loved treasure of the small South-East Asian country.

If you’re a movie buff, you would probably know that the Raffles Hotel was recently featured in the blockbuster, Crazy Rich Asians. It was after seeing this movie that I desperately wanted to go to Singapore’s famous Colonial-style, tropical hotel.

Built in the 1830’s, this magnificent building was named after the father of Singapore, Sir Thomas Stamford Bingley Raffles. It was originally a privately owned plantation house. In 1878 it became a hotel and later it was used as a school boarding house for a while.

In 1887 it was transformed into a luxury hotel (of its time). It was owned by hoteliers, the Sarkies, Armenian brothers, who expanded the building and made it into a grand establishment. Many wealthy guests staying there. But in the 1930’s the brothers went broke and Raffles closed down.

During WWII, the Japanese took over Singapore and they renamed the Raffles Hotel “Light of the South”. Then it was reclaimed by the British 3 years later.

Fast forward quite a few decades and it was eventually bought by the Qatar Government in 2010.

See our other Snazzy articles on Singapore HERE

Raffles Hotel has recently been extensively renovated to bring it back to its former Colonial glory. After being closed for two and a half years, its much anticipated reopening was in August 2019.

I was delighted to see this revived heritage landmark at its charming and luxurious best. The exterior has been perfectly restored to its former historic grandeur, whilst the interior has been immaculately re-painted a brilliant white. The lobby boasts high ceilings and stunning chandeliers as previously, and is elegantly appointed throughout with attention to detail in the decor and furnishings.

High Tea in the Grand Lobby

I was super-excited to have a reservation for the luxury experience of High Tea in the Grand Lobby. It’s a real tourist highlight you don’t want to miss in Singapore, and one I wanted to experience at least once. It truly is an indulgence and I know it’s not everyone’s cup of tea (pardon the pun).

My girlfriends and I were escorted to our formal table, meticulously laid in the centre of the high-ceilinged hall on the right wing of the Lobby. The comfortable armchairs enveloped us as the suited waiters brought us our delicacies. On silver, three-tiered serving stands, dainty square cut sandwiches of different breads, pretty petite cakes, mouth-watering desserts, and traditional scones of two types were elegantly displayed. They were too beautiful to eat. Almost. Tradition has it that you start from the bottom, and work your way up.

Tea and coffee are included. Champagne is optional for an extra cost.

Everything, of course, was exquisite, as you would expect. The square cut sandwiches were amazing, as were the desserts. However, the only disappointment for my friends and I was that there was limited savouries on offer. We would have liked perhaps something along the lines of warm pastries, such as mini quiches or savoury tarts to compliment the sandwiches. The other High Tea I have experienced had more assortment, and that was at the Windsor in Melbourne, which you can read about here.

Bookings: Best to book at least 2 weeks in advance to avoid missing out.

The popular Long Bar is located on the upper level of the Raffles Hotel, and was the first part of the hotel to reopen.

At the entrance where we queued to get in, a huge hessian bag full of peanuts stands on offer for people to shell and munch on while they wait. I wasn’t sure what to do with the shells, but noticed them all strewn on the ground. ‘That’s strange’, I thought.

Upon entering, I noticed these huge bags of peanuts everywhere on the floor and up the winding staircase. Furthermore, every table has a small hessian bag with peanuts for you to enjoy complimentary. The remains of which you are supposed to throw on or under the table or bar. It’s quite hilarious how customers seem to relish in this opportunity to participate in bad behaviour, myself included. Probably because this is one of the few places where littering is actually encouraged, which is completely contrary to Singapore’s cleanliness laws. At first I couldn’t bring myself to do it but, as its a long-standing tradition, I joined in the fun. When in Rome … right?

The tradition of the nuts on the floor harks back to the bar’s olden days. It really gives a layback vibe to the place. However, I wouldn’t want to be the one sweeping the shells up at the end of everyday. It would drive me nuts!

The Long Bar is renowned for inventing the famous Singapore Sling cocktail back in 1915. Tourists flock here to get their glass full at a whopping S$35 each + GST. OUCH! The price is pretty outrageous, you would have to agree, for this coloured drink, but hey, it’s the national beverage and absolutely delicious.

Made from ingredients which include Gin, pineapple, lime, Bénédictine and Curaçao, the pink drink was originally intended for female patrons, disguised as a fruit punch. Legend has it that it was unladylike to drink alcohol in public.

The bartender churns the Slings out by the dozens, literally, and lines them up on the bar like little pink soldiers.

I didn’t stay at Raffles on this trip. But if you wish to spoil yourself, you can enjoy a night’s stay in luxury surrounds from approximately S$800. There are 115 top-notch rooms now, since its rebirth.

You can even check in from your hotel room. I love this aspect, which reminds me of my stay in New Delhi’s Leela Palace Hotel.

You really don’t want to miss the Raffles Hotel in Singapore. Be sure to visit so you can see this historic hotel in all its splendour. It’s conveniently located close to other attractions, shopping and restaurants.

Tours of Singapore you should consider

Thanks for reading. Have you been to Raffles? Let me know what you think in the comments section below.