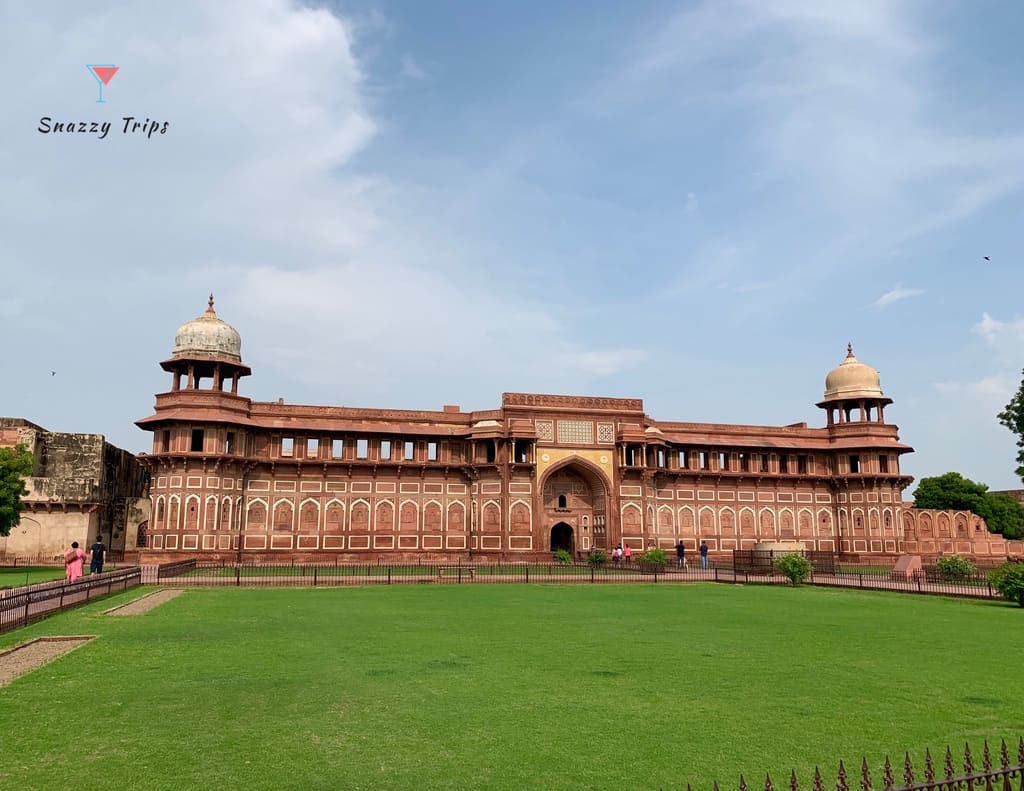 If you are visiting the famous Taj Mahal whilst touring India, then you must also see the huge Agra Red Fort nearby, just 2.5 kilometres away. Please don’t miss this amazing monument, which is one of the most important sites of India’s Mughal history. It is an immensely fascinating place that I’m sure you will enjoy exploring. I promise you won’t be disappointed. 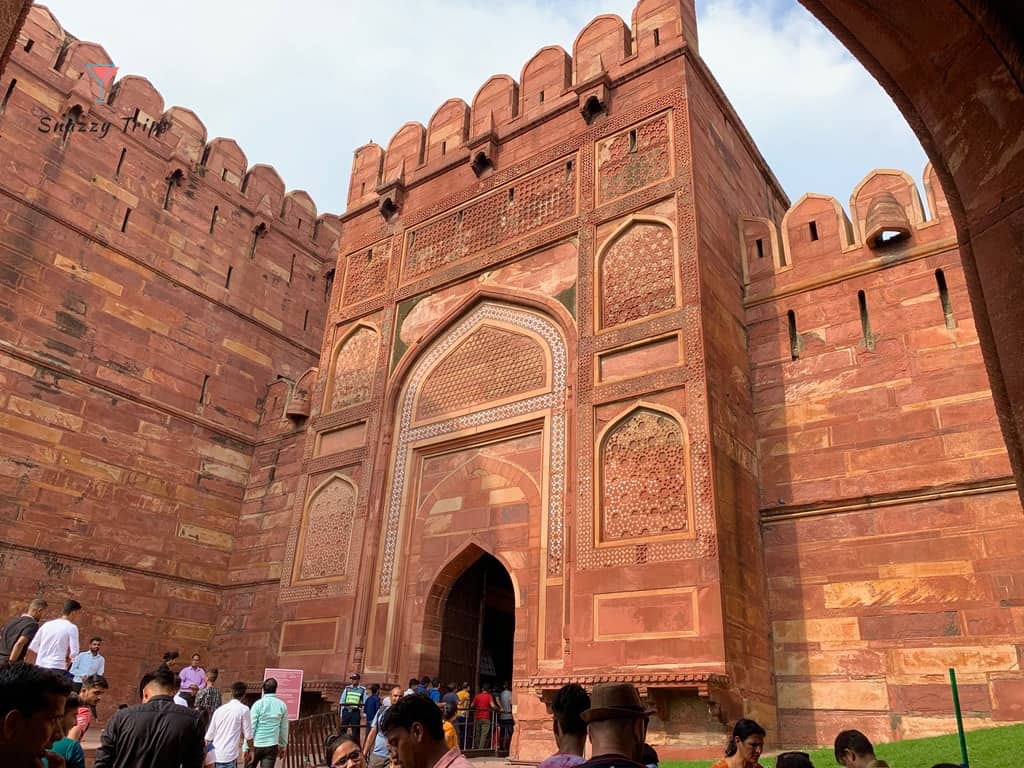 Getting to the fortress

Located just 2.5 kilometres from the Taj Mahal, we chose to see both attractions in the same day, on a day trip from Delhi. This worked well, with each site requiring approximately 2 hours to visit. We hired a car with a driver from our hotel, and it was quite the road trip, taking approximately 3.5 hours from Delhi. It was a stinking hot day, but nothing was going to deter me from going to Agra.

Our guide, who was also arranged by our hotel, escorted us through the entrance and gates with minimal fuss.

What a sight! It’s immense. This sprawling red fortress used to be the prime residence of the emperors and the royal family for almost 300 years, until the capital of the Mughal empire was moved to Delhi. It was owned by many different rulers during that period, and has been renovated and added to several times, and incorporates Hindu and Islamic design features. This would signify a strong bond between these cultures in ancient times, would it not?!

There is evidence that a monument had existed here previously, as early as the 11th century. The building of this particular structure began in 1565 on the same site, and required 4,000 builders to complete. It was ordered by Akbar the Great, grandfather of Shah Jahan who built the Taj Mahal. Originally the fort was to serve as a military base. Later it became the grand royal residence and the Mughal empire was ruled from here.

A large part of the fort, including the outer walls, are made of red sandstone. These walls are 70 feet high. Some internal buildings are made of white marble, in particular 3 mosques. Originally there were some 500 buildings within the compound, can you believe it?!. But unfortunately only 30 buildings have survived over the years, as many were demolished for various reasons. Some were rebuilt by Shah Jahan in white marble. Such was his love of the stone.

Inside the grounds there are mosques, palaces (separate palaces for the princesses), towers, pools, courtyards and gardens. The whole complex covers an area of 380,000 square metres. There were also outdoor baths, a harem and a bazaar. Can you believe it?! It even used to have a vineyard.

Furthermore, the fort housed the largest collection of treasure including gold, silver and jewellery, of the Mughal empire, and a very rare and valuable diamond called ‘Koh-i-noor’, which disappeared. However, it is now part of the British Crown Jewels on public display at the Tower of London. Apparently, India is not happy about that and have demanded it be returned to India where it was originally mined and is part of Mughal history. But I digress. Back to the fort.

The royal buildings inside the fort were made hollow so they could be filled with water from the Yamuna River, to keep them cool in the heat.

Delhi also has a Red Fort, which is very similar, but much smaller. The Mughals actually called it the red bungalow (Lal Haveli). I have seen the fort in Delhi and let me tell you it ain’t no bungalow!

Built around the same time is another monument, Humayun’s Tomb in Delhi. It is also architecturally very similar, and also built predominantly using red sandstone. Humayun was another emperor of the same family, an ancestor of Shah Jahan.

The Agra fortress is now a UNESCO site, acknowledged as the home to various dynasties in India’s history. Today a large part of the fort, some 80%, is occupied by the Indian military and is not open to the public. The part I did see of the Agra fort is immense. I can only imagine the scale of the rest of the place.

Apparently, the fort has many rooms and tunnels underground which allowed the emperors to escape in times of need. However they are no longer accessible today. What a bummer! How cool would that be to see?

Below are some important details for visiting the Agra Red Fort.

Entry: Through the south gate only

What to bring: Only a small bag, with essentials and drinking water, it it’s hot, as there is no where to buy refreshments within the compound.

Recommended: That visitors be escorted by an authorised guide with an identity card.

To make the most of your visit to see the Agra Red Fort a tour is highly recommended. Most tours are inclusive of the Taj Mahal, as the 2 sites are in close proximity to each other and are the most popular tourist spots here in Agra.

The Agra Red Fort is where Emperor Shah Jahan was imprisoned by his son Aurangzeb, who had a thirst for power and took over the Mughal empire in 1658.

Shah Jahan, who had built the Taj Mahal mausoleum for his beloved wife Mumtaz, could only see this view of the Taj every day from his palace in the fort, until his death 8 years later. He was then buried with his wife in the Taj.

I hope you have enjoyed my post on the Agra Red Fort. What are your thoughts on the fortress? Have you been? Please leave a comment below.