THINGS YOU NEED TO KNOW

Going to London and wondering if you should see Kensington Palace? Let me help you decide. Here are some things you need to know, information about what to see and do, useful tips and advice.

Built in 1605, historically, it used to be known as Nottingham House until 1689, when it was renamed by the then King and Queen, William and Mary who purchased it. Later it became the childhood home of Queen Victoria, who was crowned Monarch at the age of 18 in 1837.

The palace was in such a bad state of disrepair by the end of the 19th century, that it was almost demolished. Wood was rotting, bricks were falling off and everything had been severely neglected. But Queen Victoria, begged and pleaded for funding and donations, and succeeded in having the palace hugely renovated. It was then that it came to life again and was opened to public visitors. Kensington Palace was saved by Queen Victoria, otherwise it would not exist today.

It later became the favourite home of Princess Diana too. Diana continued to live there after divorcing Charles. Her residence was left empty for 10 years after she passed away.

Kensington Palace has had a bit of a bad reputation. Some people believe bad luck to be attached to it, based on some pretty awful events that have occurred there in its history. Mysterious deaths, drowning, small pox, miscarriages, depression, and numerous scandals, all relating to female royalty living at the palace. It’s no wonder many royals no longer wanted to live there. Can’t say I blame them. There are even ghosts haunting the palace, apparently, if you want to believe the numerous stories by the tabloids.

Many modern day royals have embraced Kensington Palace. Currently, the palace is a private residence and the offices of many royal family members, 15 royals in fact, including Kate and William, and their gorgeous children. It has been extensively renovated and has numerous separate apartments.

It is also a public museum, which some people aren’t aware of, open to everyone for general viewing. However, not all areas are accessible to us commoners.

What you can see

If you decide to visit Kensington Palace, the areas open to the public include, the King and Queen State Apartments, the Cupola Room, the King’s Staircase, the King’s Gallery, and Queen Victoria’s Residence.

The palace also houses the Royal Ceremonial Dress Collection, with more than 10,000 items of iconic fashion, which includes clothes worn by George III, Queen Victoria, Princess Margaret, Diana, Princess of Wales and The Queen. You can see some of these royal fashions on display. Remember Diana’s gorgeous gowns? You can see them here.

The State Apartments were used for the King or Queen to receive an audience of courtiers and visitors. Many dignitaries have graced these rooms and walked up this very staircase, as I have. I love walking in the footsteps of history.

The King’s staircase, pictured above, is my absolute favourite part of the public museum. Check out the stunning frescoes painted on the walls!

You will be mesmerised by the glorious decor and fabulous artwork all throughout the rooms. Have a look at photos from my visit a couple of years ago.

As I walked through the various parts of the palace, I enjoyed interacting with some of the displays, imagining myself as royal.

Outside Kensington Palace, you can stroll around the lovely gardens. Enjoy the water features and the many monuments and statues, such as the bronze Peter Pan statue. Also, you can check out the Diana memorial garden.

Whilst in the area you must go to Hyde Park. Adjacent to the palace, this land used to be part of Kensington Gardens until 1728. It was previously used as a hunting ground, for hunting deer, by King Henry VIII in the 1500’s.

Now it’s part of London’s Royal Gardens. There are 350 acres of parkland to enjoy for free. I recommend strolling around, admiring the assorted flora and fauna, the Serpentine water feature, and Diana’s memorial fountain.

Another activity I enjoyed doing was hiring a bicycle here at Hyde Park and taking a ride around this lovely part of London. It’s a fun way to sight-see.

In the past, the park has always been a place for protests and speakers, and still is. Also, many major concert events have been staged here, from the Rolling Stones to Pavarotti.

Tours you may enjoy

When I first arrived at Kensington Palace and saw it from a distance, I was a little disappointed. My honest opinion is that the palace looks rather tired and weary from the outside and not particularly inviting. But when you enter inside, it is glamorous and opulent. I actually really enjoyed seeing the interior, with the grand artwork, ornate furnishings, and personal memorabilia of past royals. Wandering around the halls and rooms gives you a fascinating glimpse into the world and lifestyle of the royals.

So, should you see Kensington Palace?

I think you would have to agree it would be a shame to miss it, especially if you were unable to tour Buckingham Palace due to seasonal closures. After all, you can’t come to London and not see at least one palace! Right?

However, if you aren’t really interested in the royal family’s history and lifestyle, then perhaps you should skip it. Or, if you have already seen another palace, you may be all royalled out, which I can totally understand.

Lastly, you may be interested to know that there is a Restaurant/Tea Room in the Orangery pavilion amidst the gardens at Kensington Palace. Originally built for Queen Anne as a conservatory, nowadays you can enjoy afternoon tea in grand royal style on the palace grounds. You’ll be able to say you dined at the palace! Click here for details.

I hope this helps you decide if you should see Kensington Palace. Maybe you’ve already been? Please leave me any comments in the section below.

Another historical palace you may want to see is the Tower of London, which I personally love. 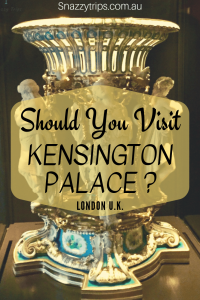 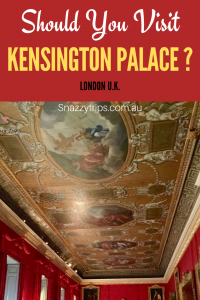 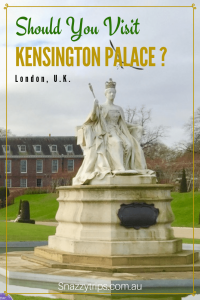 25 thoughts on “Should You See Kensington Palace?”