IMPORTANT INFORMATION YOU NEED TO KNOW

Are you thinking of driving in Italy? You must be crazy! I’m just kidding. It’s not that bad. Let’s remain calm, take a deep breath and I’ll give you my 10 tips for driving in Italy. My family and I drove around Northern Italy last year and we survived. Just barely. No, I’m joking. Sorry. It’s just that everyone warns you about Italian roads and Italian drivers, don’t they? And it puts the fear in you, when really, there are far worse places to drive in, like Kuala Lumpur, for example. But that’s another story for another time.

To drive or not to drive

Hiring a car and driving yourself around Italy really is the best way to see the country properly and some of its hidden gems. So you’ve made the right decision. It gives you the freedom to go where you want, away from the tourist hot spots, and stop wherever you feel like. This is when you will find exciting, unexpected delights, such as castles, which I love. Italy is literally littered with castles all through the countryside. Check out the beautiful Castello di Vigoleno. You cannot get there by public transport; you have to drive. There are many places you have to drive to in Italy otherwise you won’t be able to get there.

You can also find beautiful vineyards, beaches, medieval towns, markets and heaps more, that you would otherwise miss out on if you didn’t drive.

So, here are my 10 tips for driving in Italy, as a foreigner on vacation.

1. Book a car before you arrive in Italy

Before you go to Italy, book a car from home online. Don’t wait till you get there, as you might not get what you want. Firstly decide on what sort of car you need for your trip.

Things to consider when booking a car:

A small car in Italy is the best way to go, but let’s face it, with a family and luggage, it’s not going to cut it. On the other hand, driving a large car can be difficult, as Italy has a lot of small, narrow streets in most towns and cities. For my family of 4, we decided on a station wagon that allowed space for 4 suit cases and 4 bags, and enough passenger comfort for long trips. However, to be honest, it did pose problems sometimes, with narrow roads and parking.

We collected our car from Milan in the city at the start of our Italy trip, and returned it 3 weeks later at Milan’s Malpensa Airport when we flew home.

It’s best to always have an international driver’s permit (IDP) with you, in addition to your normal licence. You might not get asked for it, but to avoid any potential problems with the Carabinieri, you can obtain one from your local motoring club and it usually takes about a week. It is only valid if you carry your normal licence with you! The IDP lasts for 12 months. Usually you need one to hire a car.

We had a couple of ‘close shaves’ and almost turned into the wrong lane once or twice. But overall, we managed very well. The main road rules to adhere to are:

Learn some of the main street signs in Italy before you drive. Many are self-explanatory. Some you may not be familiar with are:

Use Google Maps to navigate your way around Italy. We found this very reliable and easy to use.

I also strongly suggest researching the roads thoroughly before leaving on a roadtrip. Do a virtual drive on google maps street view. We found this very beneficial in determining what sort of roads to expect, i.e. steep, curvy, straight, narrow, one-way, sealed or unsealed, etc. After looking at where we were planning to drive we were able to decide, whether we wanted to drive, or not. On a couple of occasions after seeing the road conditions on google, we opted to leave the car parked safely where it was and take a train instead. Sometimes a train really is the best option if the roads look unfavourable. Best to be safe, rather than sorry. Don’t you agree?

For example, we decided against driving to CinqueTterre, as there is not really much access for cars at all in these small seaside towns where roads are steep and extremely narrow in parts. Only locals drive here. So we took a train instead to one of the five towns, Monterosso Al Mare, then we were picked up from the station by a driver from our rental property.

Please limit driving in the big cities (Rome, Milan, Florence), especially during peak periods. It can be a nightmare and such a waste of your precious holiday time. Take trains or walk instead. The Italian train system is very good.

But if you do choose to drive in the cities, here are some important points.

Be sure to check the rules for driving in the city zones of the major cities, i.e. some cities like Milan have a congestion charge, in the historic centres, to reduce the amount of cars. This will be familiar to Londoners, as this idea comes from there. Thanks very much! This law is to limit pollution and damage to historic sites. In some places only locals are allowed to drive. So don’t accidentally drive into these zones.

When we were in Milan, we purchased the required congestion charge area C ticket (5 euros), then activated the ticket via text by midnight each day, as is required. But, one day we forgot. Thus, we are now waiting to receive a fine from Italy in the mail, with great anticipation.

Familiarise yourself with the rules on the local council website of the city you are driving in, and check the charges and restrictions, if any, to avoid nasty problems.

Generally, driving in rural areas is less stressful. But some country roads aren’t well maintained and lack safety barriers. Also, bear in mind, Italy is very hilly throughout, so there are some very steep roads. They can be very narrow too, and can’t possibly fit two-way traffic, even though they are supposed to be two-way.

There are some roads with hair-raising, hair-pin turns (ha-ha), such as in mountainous areas, that are very dangerous. One of the most notorious roads for tight turns in the whole of Europe is the Stelvio Pass in the Alps near the Swiss border. Driving enthusiasts love it!

8. Autostrade and tolls in Italy

Did you know Italians invented motorways? The very first was in 1924, from Milan to Laghi in the Veneto region. By 1940 Italy had autostrade all over the country.

Autostrade are the easiest and quickest way to get around Italy, to avoid traffic congestion and the likelihood of getting lost. But there are a few important points to be aware of before heading out on the tollroads.

a. Don’t drive as Italians do, they are a bit cocky and aggressive on the autostade. Let them pass you. Don’t try to keep up with them. Trucks are also notorious for being speed freaks.

b. Don’t believe the myth that Italians don’t have to follow speed limits, because things have changed in recent years, with law enforcement now being very efficient. Speed cameras will catch you and fines will be issued and chased up, even for us tourists. The maximum speed limit on autostrade is 130kph. However, if it’s raining or snowing, the limit is reduced to 110.

c. Be prepared for the cost. Most autostrade are toll roads and they’re not cheap. Approximately 1 euro for every 7 kilometres is what you can expect to pay.

d. Take a ticket when you enter the motorway, and put the ticket in the machine when you exit, then pay.

f. If something goes wrong at the toll booth, just press the help (aiuto) button, but do not reverse out, as this is illegal.

g. Fuel up before, as fuelling up on the autostrade will cost you more than in the towns.

The ‘Autostrade Per L’Italia’ website has a Tolls Calculation feature that I thoroughly recommend. It’s a very handy tool that helps you plan your road trip. It estimates the toll costs and the driving time for you. For example, driving from Lake Como to Milan, it calculated that it will cost 5.50 euros and the distance is 60.1km.

Check parking restrictions and always follow the rules. Preferably park in a supervised car block in cities, as it’s more secure than street parking. But if you do park on the street, check the signs and have coins for parking metres. I was flabbergasted to see cars that were parked curbside only had a space of a few centimetres between them.

Q. How on earth do they get out?

A. They gently bump and nudge the cars to make room.

I’ve noticed very few luxury cars on Italian streets, even though Italy produces some of the best luxury sports cars in the world, such as Ferrari, Maserati and Lamborghini. (Check out my article on the Lambo factory tour.) I think I know why they don’t drive them on the roads. It’s safer to keep them in the garage.

10. Final bit of advice before driving in Italy

Don’t have a late night before a really long drive, take breaks often, don’t panic if you take a wrong turn and don’t distract the driver, as he/she has to focus a little more than usual when driving in Italy.

I hope my 10 tips for driving in Italy assist you on your Italian road trip. 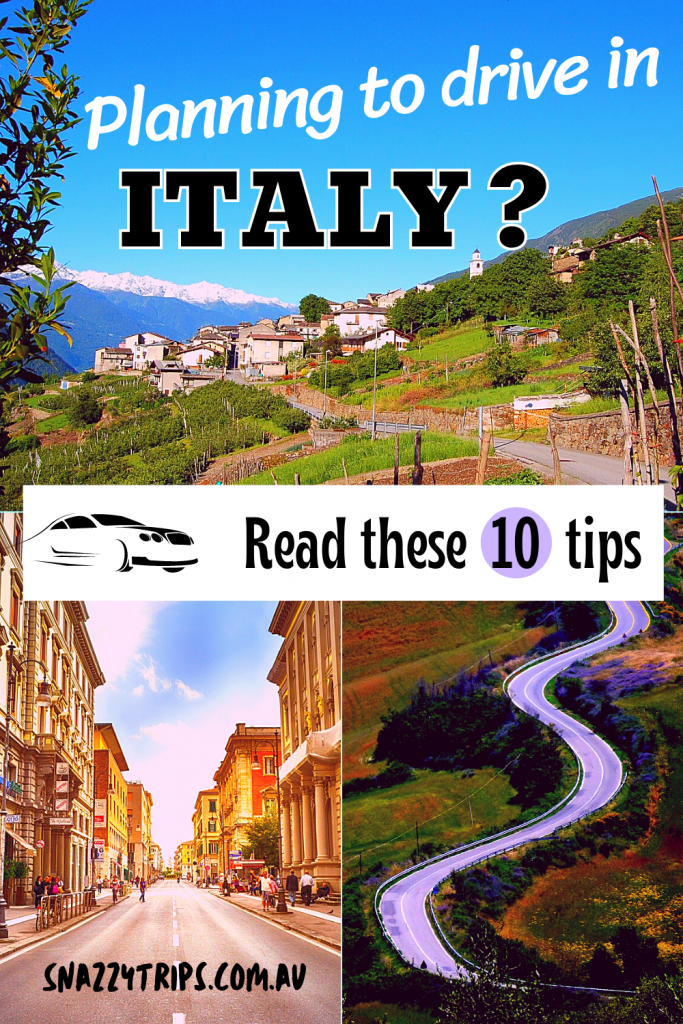 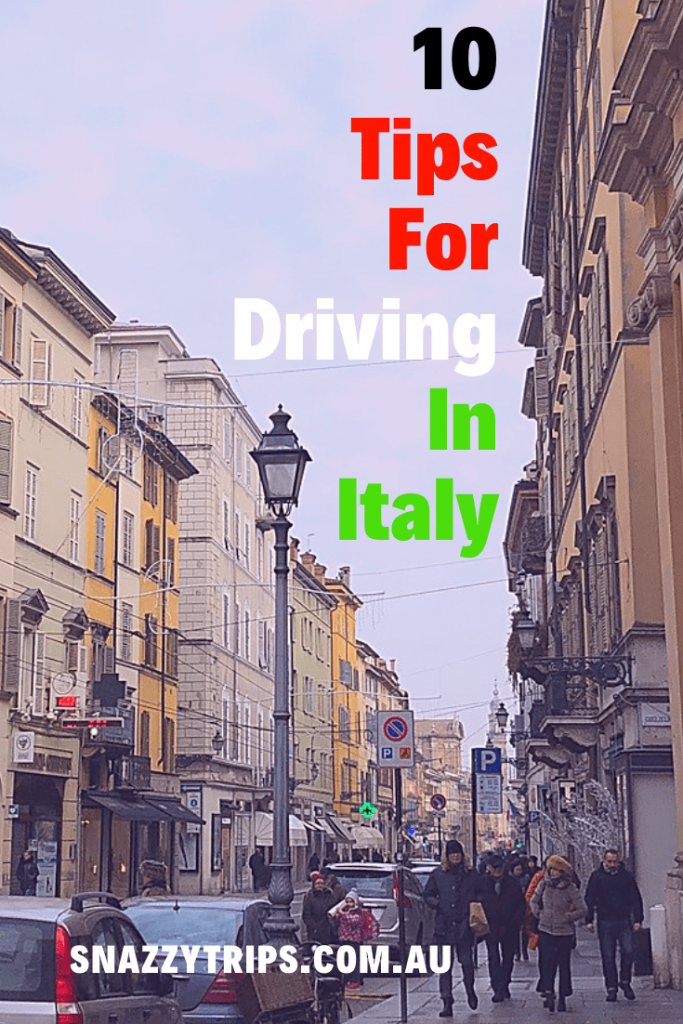 9 thoughts on “10 Essential Tips For Driving In Italy”