The Palace of Versailles is a grandiose monument from a fascinating period in French history when the royal family basked in extraordinary opulence. Magnificent architecture; extravagant luxury; stunning masterpieces … there aren’t adequate enough words to accurately describe how impressive the Palace really is. You must see the Palace of Versailles for yourself. I was blown away by the ostentatious lifestyle enjoyed by the French royals in the 1600’s and 1700’s at a time when their subjects were poor and starving.

Getting to The Palace of Versailles

Versailles is a distance of approximately 20km from Paris. Perfect for taking a day trip. So I hopped on a train, which took roughly 1 hour, followed by a 5 minute walk to the Chateau.

I was immediately overwhelmed when I arrived and saw it from a distance. Tall, intricate, gold-leafed gates welcome you as you approach, and a long never-ending fence in front of the beautiful, majestic, enormous chateau. The town of Versailles is quite small and the palace definitely stands out, to say the least.

Once Upon A Time

Originally, it was home to the French Monarchy and the government, during the ancient regime, from Louis XIV until Louis XVI. From 1682 until the French Revolution in 1789, it was a glorious showpiece proudly displaying everything the powerful nation had achieved and built, and all the military battles they had won up till then.

It’s hard to believe that it had once been the site of King Louis XIII’s private hunting lodge which he decided to rebuild and make it his residential palace. Then it was later extended, and extended, by his son and subsequent Monarchs.

In the end, the Palace of Versailles was abandoned following the overthrow of the monarchy, when the last King (Louis XVI) and Queen (Marie-Antoinette) were forced out of Versailles, and subsequently beheaded in Paris. That marked the tragic end of the royal family in France.

I find the history of the era quite intriguing. It really was a fascinating period.

Today, the Palace of Versailles is a public Museum of French history, art and architecture for the world to appreciate all the past glory of France. It is owned and maintained by the state and is listed on UNESCO as a Heritage Site. An iconic landmark of France and Europe, it’s no wonder 5 million tourists visit the palace each year. Incredible!

Outside, it is everything and more you would expect a palace to be: majestic, grand, formal and lavish. The architecture is Baroque which is very ornate and elegant, typical of the times in Europe. There are a mere 1,400 fountains! and 400 statues! that adorn the grounds. Yep, you read that correctly.

The formal gardens are over 800 hectares and were designed in the classical French-style and have English hedges throughout, making it very geometrical and pleasing to the eye.

Inside the Palace of Versailles

Inside the Palace, there are 700 rooms! Can you imagine that many rooms? All intricately decorated and painted by French artisans, with frescoes, antique furniture and gold and silver embellishments everywhere. Complete and utter decadence. It’s truly unbelievable.

The Most Famous Room

The most famous room would have to be the Hall of Mirrors. It is 73 metres long, lined with tall arched, arcade style mirrors and candelabras. There are 24 crystal chandeliers, and artwork painted on the arched ceiling, with gilded cornices. The sunlight coming through the windows reflects off the mirrors and creates an amazing visual effect. Absolutely stunning. It simply took my breath away.

Mirrors were not common place back then, as they were expensive luxuries only for the very rich. The mirrors are the only aspect of the Palace not French made, as the Italians from Venice had the monopoly on making mirrors and would not share their secrets. So the King made the craftsmen defect to France to make the mirrors. But they were later assassinated by the Venetian government for treason.

The Hall of Mirrors was used for wedding receptions, formal ceremonies, balls and entertaining visiting dignitaries and still gets used occasionally today.

I could have stayed and admired this room for hours, if it weren’t for all the people in there spoiling my view.

There are rooms decorated in every bright colour imaginable.  Some of the colours are a little bit much in my opinion, but hey, who am I to judge. It sure does create impact upon entry to a room.

I do though, love all the marble throughout the Palace. Extraordinary patterns and colours of white, black, pink, red, green, and all hand polished at that time. Amazing.

Let me address the bedrooms. I could not get over how small all the beds were. People must have been very short in those days.

I found this antechamber very interesting. Why? It’s a huge room where the royal family would dine every night in front of an audience of the public, that needed to be suitably dressed (not sure what that would entail), who would delight in watching their sovereigns eat. The people would sit on the stools in the viewing area. Why? Who knows.

Speaking of food, after a few hours of roaming around this huge Palace, I was getting a bit ‘hangry’. Luckily there are eating establishments on the premises, merci beaucoup. So we stopped for a much-needed break and had lunch.

“Let them eat cake”, as Marie-Antoinette, wife of Louis XVI, once said. So I did. And I can now officially say that I have dined at the Palace. Quite a thrill actually.

It is not physically possible to see all of the rooms on your visit, even if you were allowed access everywhere, which you definitely are not. So, you can take a tour that guides you through some of the main areas of the Palace, which still takes several hours.

SNAZZY TIP: Best to arrive early, if you’re planning a visit, so you have plenty of time.

I understand why it is one of the most visited castles in the world. You’ve just gotta see it to believe it. Inside it is mind-boggling. I walked away speechless with my jaw hanging open.

SNAZZY TIP: If you plan to check it out, which I thoroughly recommend you do if you’re coming to Paris, entry is free with the Paris Pass. Well worth it. Otherwise it’s €18.

Get the Paris Pass

SNAZZY TIP: If you go in Summer, you will be fighting crowds and long queues to get in. I went in Winter and the queues weren’t long at all and it was easy to wander around at my leisure and take photos.

Over the years a lot of money has been spent restoring the palace to its former glory. And as for the original cost of construction, no one really knows.

Here are some tours of the Palace of Versailles I recommend

You must see the Palace of Versailles, if you haven’t already.

Be sure to read The Eiffel Tower and Montmartre for more of France. 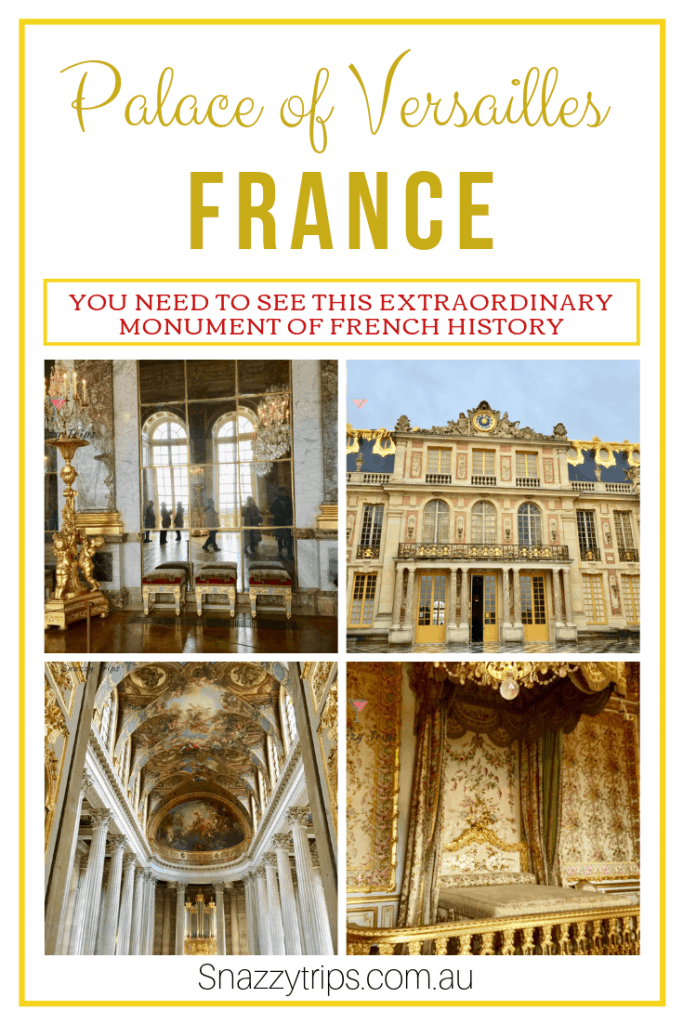 8 thoughts on “Visiting The Magnificent Palace Of Versailles”