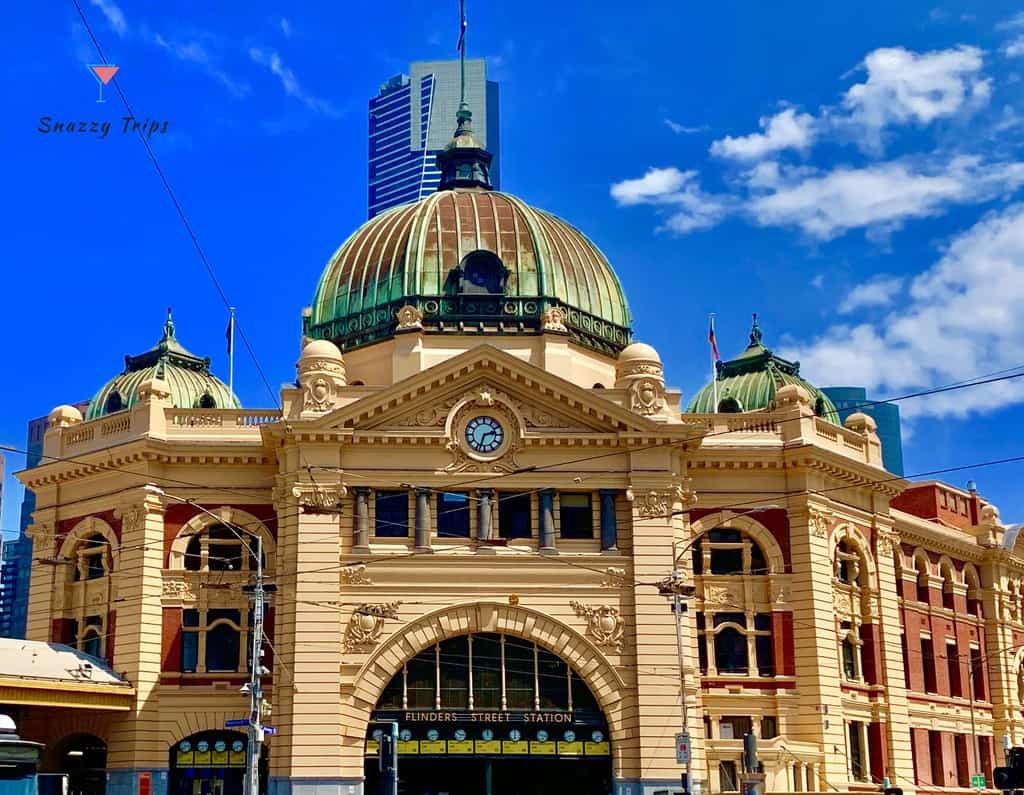 I love Melbourne. It’s my birthplace and my hometown. So I’m a bit biased when I say it’s a marvellous city. There are so many beautiful, fun and interesting aspects of the city. Here I’m going to share with you 12 must-see places in Melbourne that give you an appreciation of the city’s architecture, street art, laneways, river and more. They can all be visited in an easy one-day walking tour.

The city of Melbourne is a very walkable city, it’s easy to find your way around, and everything is conveniently located and well planned out. The places I’ve chosen are all within walking distance from each other. So, put on your comfy shoes and here we go!

One of the most recognisable features of Melbourne is Flinders Street Station’s yellow facade and green dome. Dating from the early 1900s, the style is neo-classical, and spans 2 whole blocks. It’s a huge station. The small clocks above the entrance are still the original ones (there was outcry when they tried to get rid of them years ago and were immediately put back) and the tall clock tower sits at the Elizabeth Street entrance. It is a meeting point for Melburnians and a central icon.

A performing art centre with theatres and concert halls at Southbank, known by its iconic spire. You can see all manner of concerts, shows and productions here, such as opera, ballet, local and international performers. Most of the facilities are underground, which is quite unique.

The spire is 162 metres high and the metal lattice is similar to the Eiffel Tower, but is actually inspired by a ballerina’s tutu. At night the structure is lit up and stands out in the Melbourne skyline along the Yarra River.

Snazzy fact: In 2012 fireworks for new years eve malfunctioned, causing the spire to catch on fire.

A major architectural landmark, this grand Gothic-Revival church sits diagonally opposite Flinders Street Station. It has been part of Melbourne’s cityscape since 1880 when construction began. Many important occasions of state have been held here.

This skyscraper is just over 297 metres tall in Southbank, completed in 2006. Its the 2nd tallest building in Australia and is mostly residential. The outside colours of blue and white represent the Eureka Stockade rebellion from the gold rush era of Victoria in the mid 1800s. On the 88th floor the popular Observation Skydeck has ‘The Edge’, which is a cube enclosed of opaque glass that juts out 3 metres with you inside (if you dare), and then becomes clear to reveal an amazing view of the city.

Snazzy fact: The Summit levels on the 82nd to the 87th floors cost about A$7 million for one apartment, unfurnished.

The Forum is a Gothic-Romanesque style theatre for shows and functions. Since 1929 this palace inspired monument, with copper domed clock tower and mosque styled windows has been a much loved feature of the city. Originally, an over-the-top cinema, patrons were wowed with an ‘atmospheric’ theatre experience, complete with garden like features, fresh flowers and twinkling blue sky. It has recently been extensively renovated to enhance its original beauty and will continue to be a special part of the city.

Snazzy fact: there are Greek and Roman statues inside (I’m not sure why).

This is a Gothic-Revival church completed in 1897 and standing at 105 metres is located at Cathedral Place, East Melbourne. It’s pretty impressive, built from bluestone and sandstone, and took 80 years to build. There used to be a large majority of Irish Catholics in Melbourne at the time, hence why it exists.

Snazzy fact: It is the tallest and biggest church building in Australia.

The Great Petition – This large modern sculpture near the church, is a white scroll like monument celebrating the achievement of women’s right to vote in Victoria since 1908.

Snazzy fact: Victoria was the last state in Australia to allow women the right to vote.

This Victorian style hotel is a personal favourite. The Windsor Hotel is a charming historic hotel dating from 1883 and is the only city hotel still in existence that is dated from the 19th century. Located on Spring Street, it is a Melbourne icon and institution. Its old fashioned elegance and traditional English customs make it a popular place for formal afternoon tea, served in the grand dining room with all the trimmings.

It was named after the British Royal Family and many famous celebrities from around the world have stayed here.

Hidden away in the many lanes and alleys are a plethora of street art, shops, cafes, bars and restaurants. They’re exciting to explore to see what gems you can find tucked away from the main thoroughfares.

I love Degraves Street for the multitude of eclectic eating places, and it’s always vibrant and bustling with people.

Street art is a popular form of art and expression here, allowed in certain areas of the city. Not everyone approves of this art (some call it vandalism). But it does add colour and interest to otherwise gloomy parts of the city and there is some amazing art on display, free for everyone to appreciate, in the form of huge murals, stencils, graffiti and slogans.

It has become a big tourist attraction, where people love to take selfies.

The streets of Melbourne are easy to navigate as they are set in a grid format, which means you can’t really get lost. Or at least, you’re less likely to get lost. So feel free to venture off down any street to explore.

Let’s talk shopping, one of my favourite subjects – major shopping complexes are plentiful, such as Emporium, Melbourne Central, QV, Spencer Street Outlets and loads more. Department stores are accessible from Bourke Street, luxury stores and designer labels are on Collins Street and Swanston Street has mainly discount stores. Arcades have lots of lovely boutiques and interesting shops, well worth the time to peruse. Then, there is the popular Queen Victoria Market (closed Monday and Wednesdays) which has food and all manner of goods for sale.

The iconic trams are a feature down almost every city street and the maroon coloured City Circle Tram is free for anyone and runs daily, all day, around the city for free, taking you past all the popular spots. How good is that!

‘Fed square’ is the public heart of the city, but many think it’s an eyesore. I quite like it. Its modern architecture does look a bit like controlled chaos, with shards of metal and glass, geometric patterns and undulating surfaces.

It is centrally located, opposite Flinders Street Station and provides cafes and restaurants, and is just a cool place to hangout and relax in the city. The open piazza has a huge screen broadcasting major events, sports and music and draws quite a crowd.

Inside there is a cinema, galleries and events are often held at this wonderful venue. It is a cultural hub of Australian art, particularly Aboriginal art and culture, which is on display for everyone to appreciate.

Snazzy fact: It has recently been named one of the best public squares in the world.

I thought I’d include this in the list simply because it is so unique. The tallest and skinniest residential tower in Melbourne, located in Flinders Street, is less than 7 metres wide and 28 storeys high, which is bordering on the limits of being structural sound. Would you live in this? I don’t think I would.

This ‘pencil’ tower is so thin, that the lifts open up directly into each apartment, where there is only one per floor, which is pretty cool. The residents have a lovely view of the Yarra River, gardens and federation square.

What about parking? I hear you ask. Well, there is a 9 level stacker to slot cars one on top of the other, via a hoist. Is that practical if you’re in a hurry? I’m not so sure.

These ‘sliver’ buildings could become a popular city trend in the future.

This is my favourite part of Melbourne. Where there is water, there is life. All along the river there are restaurants, bars, cafes, shops and more.

Then further along the riverside there is South Wharf Shopping Centre, Pollywoodside Ship, Exhibition Centre, Convention Centre and Aquarium on the other side of the Yarra, all in close proximity.

Also available are helicopter rides from the helipad on the water and cruises down the river, which is a must.

There is so much to do here all year round.

Last but not least, make sure to catch the fire displays at night, every hour on the hour, until midnight, outside the Crown Complex, in front of the restaurants. It’s the world’s biggest fire show. It is hot!

Snazzy fact: Melbourne was voted the most liveable city in the world for 7 years straight by EIU.

A great way to relax and see all of the best parts of the city is to take a Melbourne Bus Tour.

Some other tours for you to consider in Melbourne and beyond the city.

Thanks for reading and I hope you enjoyed my 12 must-see places in Melbourne.

Be sure to have a look at Dromana, one of the many beach destinations only an hour’s drive from the city of Melbourne, and some of the fabulous Melbourne Wineries in rural Victoria. 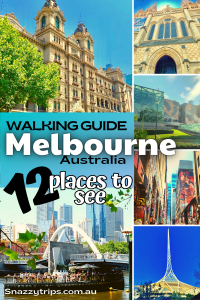