Planning a trip to London for the first time and not sure whether to visit Westminster Abbey? Is it just another church? What is there to see? Well, there’s a whole host of great things to see and enjoy. I’m going to give you 10 glorious reasons, along with some amazing facts, that will inspire you to take a tour of Westminster Abbey. 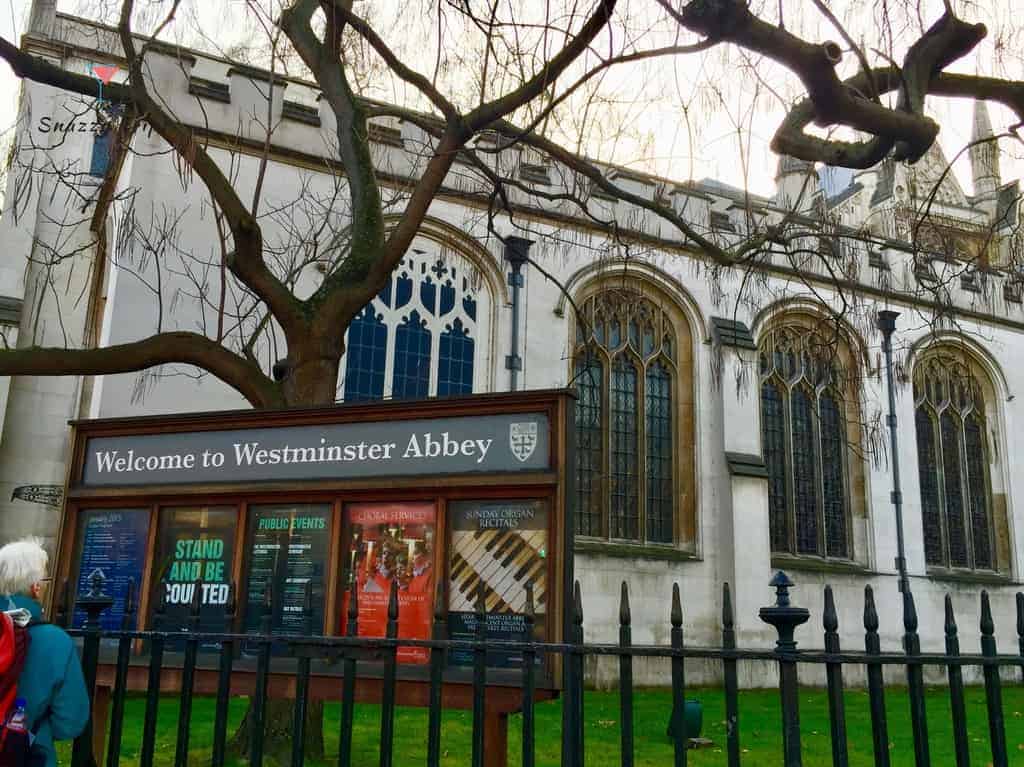 Why visit Westminster Abbey? Before we start, let me tell you that the official name of the Abbey is Collegiate Church of St. Peter at Westminster. And despite its name, it is no longer actually an Abbey. It is an Anglican Church, but isn’t ruled by the Church of England any more. Westminster Abbey belongs to the ruling Monarch, making it ‘Royal Peculiar‘ in status since 1534. Very peculiar indeed! Basically, it’s a royal church.

However, it is still a church with daily worship, open to everyone for prayer, from any faith, for free.

Furthermore, it is the venue for important national celebrations and cultural events which are held throughout the year.

Read on for 10 glorious reasons why you should visit Westminster Abbey in London.

Unfortunately photography inside the Abbey is off limits, so my photos are of the outer areas only.

10 GLORIOUS REASONS TO SEE THE ABBEY

It's a UNESCO world heritage site

A stunning monument of Gothic Architecture, the Abbey is over 1000 years old, having been founded in 960 by Benedictine Monks as a house of worship. It has been rebuilt since then, but still has some original features.

Today, together with the Houses of Parliament of Westminster, Westminster Abbey is a UNESCO site. This world heritage status was given for its rich history, importance to British life and the Crown, and for its grand architecture.

39 Coronations have been held here

The coronation venue for all British Monarchs since the 11th century. The first was William the Conqueror’s crowning in 1066. The last crowning was the current Monarch, Queen Elizabeth II in 1953. The Coronation Chair, not to be confused with the Throne, is a gothic armchair made of timber and stone. It doesn’t sound particularly comfortable at all.

17 Royal weddings have been held here

Since the year 1100 when Henry I married here, there have been 17 royal weddings held at Westminster Abbey. The tradition is still upheld in modern times, with the most recent royal wedding that has taken place at the Abbey is that of Prince William and Kate Middleton, and prior to that, Prince Andrew and Sarah Ferguson.

You too can walk down the aisle, as a tourist only, of course.

Those who live in the precincts of the Abbey, can apply to be married there, even if not royal, but it is very unlikely their wish will be granted.

It's a national shrine

The Abbey is a burial site and memorial of over 3,300 notable persons of British history. Many are buried in graves, or have their ashes here. It has always been a great honour to be buried here, since medieval times.

There are Monarchs, Prime Ministers, priests, warriors, doctors, scientists, poets, actors, musicians, and others who are either entombed here, or have a memorial plaque, statue, bust, tablet or window in their honour. It makes for one massive mausoleum and it’s getting pretty crowded.

Some of the famous names laid to rest here are Sir Isaac Newton, Charles Darwin, and Mary Queen of Scots. See the full list here.

The most sacred spot in the whole Abbey is the shrine of St Edward the Confessor, which sits right behind the Altar. He was an Anglo-Saxon king in the 11th century, and later made a Saint.

You will see lots of effigies, sleeping tomb sculptures, and find some rather macabre looking statues here too.

Notably absent here are the tombs of Queen Elizabeth’s parents and sister, Princess Margaret, who are buried at Windsor Castle. Also, that of Princess Diana, who is buried at the Spencer family estate.

There is a wealth of art to explore

A wealth of paintings, statues, sculptures, wood carvings, textiles, and other artefacts are part of the Abbey’s treasures for all to discover and admire. Everywhere you look there is something special to enjoy. Paintings by international artists, such as Italy’s Canaletto and Australia’s Ralph Heimans are displayed.

Before canvases, wall paintings on wood panels were popular, and one of the finest of medieval England is here at the Abbey, called the Westminster Retable. Painted in the 1200’s, it is a large, wide piece of religious art behind the main altar, by an unknown artist. It has suffered some serious damage over the years but has managed to survive.

The architecture is incredible

The building itself, is incredible, inside and out. A masterpiece of Gothic architecture and British design, but also influenced by French cathedrals of the time. Columns, pointed arches, ribbed vaulting, intricate designs and embellishments adorn the Abbey throughout, with stonework, marble and attention to geometric shapes. The vaulted nave ceiling is over 30 metres high, the highest in Britain.

Features that I love are:

The Abbey has a famous Poets' Corner

If you’re a literary lover, you will appreciate Poet’s Corner. There are some big names commemorated here. More than 100 of Britain’s past writers and playwrights are either buried here or honoured in some way, such as the likes of William Shakespeare and the Bronte Sisters. Geoffrey Chaucer was the first poet to be buried here.

The Abbey’s Pipe Organ is a very impressive instrument with huge wind pipes that are beautifully decorated. It is an integral part of the majestic atmosphere that coronations and other grand occasions command. The organ is also in full swing for daily services and accompanies the choir. And you can experience weekly organ recitals every Sunday.

There are hidden galleries

There are hidden galleries on the triforium, that have only recently been opened to the public, since 2018, called the Queen’s Diamond Jubilee Galleries. They have been hidden for over 700 years. This used to be the Abbey’s attic, used for storage. Now you can marvel at a rich part of history, the connection between the monarchy and the Abbey. 300 objects are on display of medieval memorabilia. Plus, you can see views of London from here.

You can access these galleries next to Poet’s Corner.

One of the most iconic religious and cultural buildings in the world. A must-see tourist attraction, located in the heart of London, close to other popular sites such as Big Ben, Buckingham Palace and the London Eye. Over a million people visit the glorious Abbey each year from all over the world. It’s a fascinating part of London that anyone who loves history, architecture and the arts, will enjoy.

If you can’t visit Westminster Abbey at the moment, you can take a virtual tour online here.

Thank you for reading ‘Why visit Westminster Abbey’. I hope you’ve been inspired to do so. 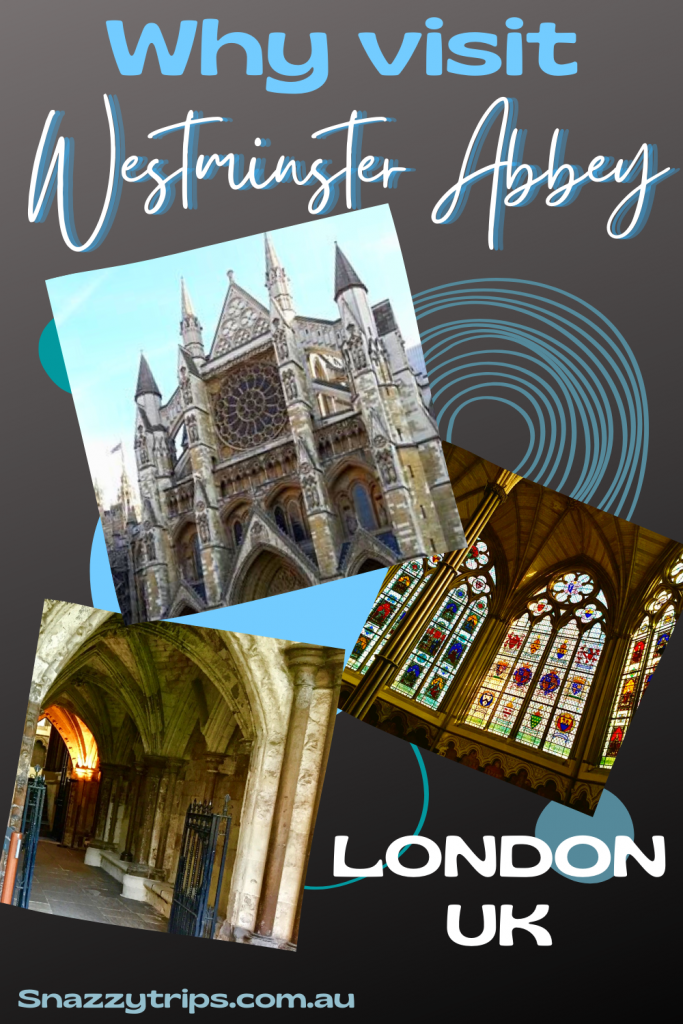 2 thoughts on “Why Visit Westminster Abbey”