A rickshaw ride in Old Delhi is the best way to experience the heritage area. A cycle rickshaw, also known as a pedicab or tricycle taxi, enables the rider to take you deep into the heart and soul of the city, where cars can’t go. Here you will be immersed in the organised chaos of real life in India’s old capital. It’s a little scary, but absolutely fascinating.

THE BEST THINGS TO SEE

I spent a few days in Delhi and wanted to experience the old, historic part of Delhi, where the city was first established. If you are planning a visit to this part of town, I’ll tell you the best things to see in Old Delhi and around the Chandhi Chowk area.

Back in the 1600’s, the capital of the Mughal empire in South Asia was relocated from Agra to Delhi, which is now known as Old Delhi. It was then a gated walled city, which comprised of the majestic Red Fort, a huge Mosque and the vast neighbourhood including various markets in the middle. This formed the city that was then called Shahjahanabad, named after Emperor Shah Jahan, of Taj Mahal fame.

Make sure you check out my Ultimate Guide to the Taj Mahal.

The streets of Old Delhi were not designed for modern day vehicles. They are extremely narrow and the area is overpopulated with people going about their everyday business. It is not possible for normal cars and trucks to fit through the tight streets in Old Delhi. So rickshaws and bikes are popular and are a necessity to get around, other than walking. Even goods are transported with rickshaws.

So, my husband and I hired a rickshaw and rider to take us through the neighbourhood, and what an experience it was! It was mind-blowing and really fascinating. Perfect for people watching and to observe the way of life here in the ancient district.

See the Red Fort on a rickshaw ride in Old Delhi

One of the most important sites to see here is the Lal Qila Red Fort, built by Emperor Shah Jahan. It is a UNESCO site and almost the same as the Red Fort in Agra. A stunning monument of historical significance, the fort was the seat of Mughal rule until 1857 when the great revolt took place and British rule began.

Built of limestone in the mid 1600’s, and later painted red, many people incorrectly think it was built of red sandstone, but that is not the case. The buildings inside the fort complex demonstrate the lovely fluted arches and intricate carvings in typical Mughal fashion. White marble is a prominent feature and precious gems have been inlaid in the floral designs which is also in keeping with other monuments of that era throughout India.

Snazzy Tip: If you have seen the Red Fort in Agra near the Taj Mahal, you don’t really need to see this one, as it is virtually the same. In fact, the fort in Agra is bigger.

There is a light and sound show here at the Red Fort in the evenings also. This is a fun spectacle which tells the history of India.

Open: Every day from 9.30am, except Mondays when it’s closed.

From the Red Fort we continued on our rickshaw ride through the Old Delhi streets. We rode through the seemingly endless labyrinth. I was a little concerned, not quite sure where we were going. It was my first time here and I was trying to stay calm. As we turned down one lane after another, we got deeper into the congested heart of Old Delhi. I was in another world.

The other important site in the Chandni Chowk area is the Mosque called Jama Masjid. This is India’s biggest mosque and one of the largest in the world. 25,000 people can fit into the open square. It’s grandly positioned at 10m above street level, commanding an imposing view over Old Delhi. You can’t miss it. As I was riding in the rickshaw I could see the onion domed vision in the distance.

It’s one of the most popular tourist attractions here. Constructed in the mid 1600’s, it was built from sandstone and marble, in true Mughal architectural style.

It was a very hot and humid day of 35 degrees celsius and upon entering the mosque complex, which is free, I was donned with a long kaftan type garment over the top of my clothes and, as is customary at all places of worship in India, had to remove my shoes. Normally, I’m perfectly fine with this, except on this day, when the pavement was literally scorching hot. As you are not allowed to enter the prayer hall unless you are Muslim, I was only able to stay in the open courtyard and the soles of my feet were burning. I was in sheer agony. Later my feet came out in blisters.

Snazzy Tip: Wear socks if it’s a hot day. I know this sounds weird, but trust me, your soles will thank me.

The Chandni Chowk market place has to be seen to be believed. It is so densely inhabited and overcrowded with shops, stalls, carts, trikes, bikes and people. A veritable rabbit warren, with narrow lanes and passages, this is one of the largest markets in India, bursting with culture, colour and smell. Some of the shops here have been trading for over a hundred years.

All manner of goods are sold: textiles, clothing, saris, jewellery, wedding paraphernalia, books, leather goods, and of course, food and spices. People flock to these parts for bargains and food. You won’t come away empty handed.

Tip: The market is closed on Sundays.

The rickshaw ride in Old Delhi was certainly an eye-opener and an experience I will never forget.

A huge thank you to my rider who cycled for about an hour in the blistering heat. I felt so guilty and offered him a bottle of water, which he didn’t accept.

Cost: You can agree on a price with the rickshaw driver beforehand. We paid 1000 Indian Rupees, about A$20, for an hour. He seemed happy with that.

He also took us to a ‘special’ shop, where we purchased a number of marble souvenirs, which he sat and watched with great interest. I’m sure he will have received a nice little commission for taking us there.

But I have to mention one more thing.

What Shocked Me About Old Delhi

Aside from the fact that the whole area is extremely rundown and dilapidated to put it mildly, one of the most astounding things here is the massive tangle of overhead wires above the streets. They are draped everywhere and hanging down precariously above the heads of the people living and working here. These are a serious hazard and pose a real danger to the locals and tourists. It actually shocks me that this situation has been allowed to fester. To make matters worse, many wires are uninsulated too.

The problem in part is due to the locals who are notorious for stealing electricity from each other and run illegal cables everywhere to get free power. Electricians can’t repair things properly because of the clutter and confusion, and the government doesn’t seem to be doing enough, or really care about doing anything at all, I think, to improve things. When the monsoon season hits, it is even worse. Broken wires, many which are exposed, get wet and sit in puddles.

Numerous electrocutions have occurred over the years, fires have broken out and lives have been lost. Firefighters have difficulty getting through the area when they are called in an emergency.

There has been a lot of talk for many years about putting wiring underground, but not much action. It seems to be an insurmountable feat, far too difficult to fully achieve.

Interestingly though, wiring in New Delhi is all underground!

What are your thoughts about Old Delhi? Leave me a comment below. 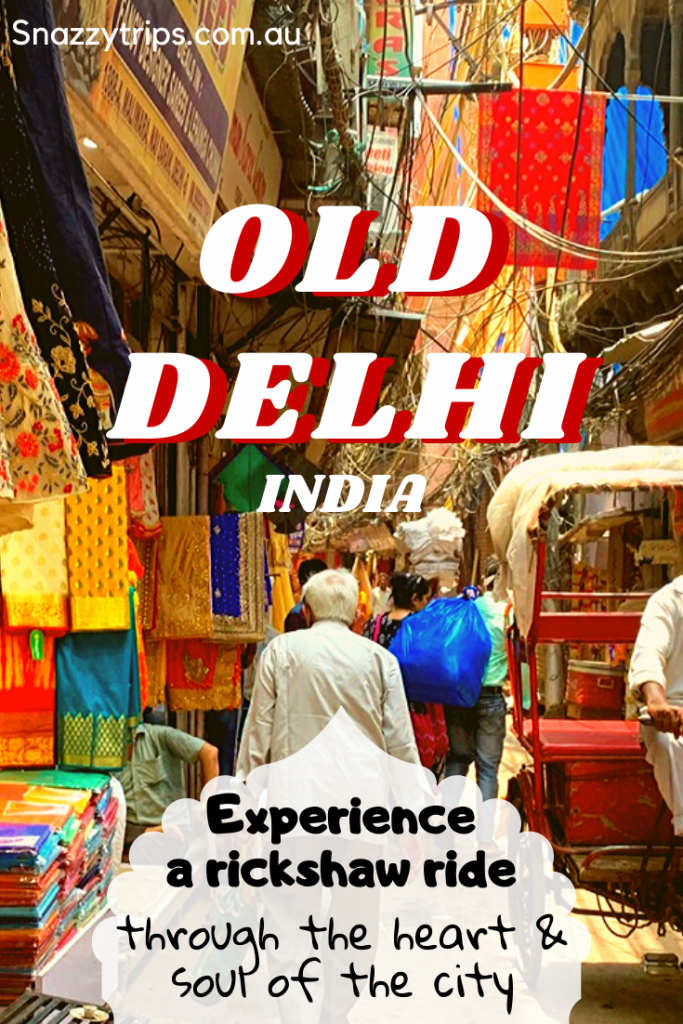 16 thoughts on “A Rickshaw Ride In Old Delhi”