Fall In Love With This City

You must visit Genoa and once you do, you will fall in love with it, as I did. This grand historic, bustling seaside city in Northern Italy is full of wonderment everywhere you turn. I couldn’t get over how much it has to offer, and yet I’m a little amazed it doesn’t attract more international tourists as a prime holiday destination.

Genoa is currently the main port of Italy and one of the busiest and largest ports in the Mediterranean. The port has a long and and rich sea-faring history on which the city was built.

I was excited to spend 5 days here in a very spacious 5th floor apartment of a building which I’m told used to be a palace. Which doesn’t surprise me, because this city is full of palaces! You should see them.

This lovely apartment on Corso Solferino, which I booked online, was absolutely charming. It was extremely spacious and had beautiful old features, such as elaborate mosaic floors. And the views of the city and the sea were fantastic.

But can I just mention the door? It was bolted to the hilt! Just who are they trying to keep out – a rhinoceros?

We drove here from La Spezia, near Cinqueterre, about 100 km drive, autostrade all the way. Not scary at all, nooo! 130km/h is the speed limit in Italy. Have a read of my Driving in Italy post.

Tip: Please do your research on Italian roads and autostrade before deciding to drive here (it’s not for the faint hearted) and check the tolls you have to pay on autostrade.it.

Arriving a little dishevelled but safe, we immediately set about exploring our new home city for the next few days.

The oldest part of the city is the biggest medieval town of Europe and it’s like being back in another time. Here you have part of the ancient walls of Genoa, Porta Soprana and ruins of a monastery from the 12th century. I love wandering around these caruggi (narrow alleys), to get a sense of what it was like back then.

Fabulous architecture is everywhere here in Genoa, but the most enchanting are the dozens of Palaces that used to belong to the nobility of the 16th to 18th centuries. These super wealthy families made their fortunes from trade, banking and building ships. They were given permission to build their palatial homes together, in order to create their own exceptional district. But in return they were obliged to host important visiting overseas dignitaries. Their palaces were categorised on a list according to their suitability for certain guests, hence the name, Palaces of the Rolls. How would you like being forced to have strangers stay in your home? Not sure I’d like it.

These mansions from the Italian Renaissance period grace many of the streets, known as Le Strade Nuove (the New Streets). One street in particular, Via Garibaldi has Palaces built side by side, wall to wall, all along this narrow road. It’s simply stunning. But I noticed that yards weren’t very important. I wonder why.

Now-a-days these historic monuments are Museums and Art Galleries, or used as banks, tourism offices, council buildings etc. And of course, they are Unesco World Heritage Sites.

Three of the most prominent aristocratic buildings are Palazzo Rosso, Palazzo Bianco and Palazzo Doria Tursi. If you are a bit curious to see how the nobles lived, you can visit all three of these for about €10, to have a sticky beak inside.

One of them has a hall of mirrors, which reminds me of the Palace of Versailles in France.

Another Palace, the Palazzo San Giorgio on Via della Mercanzia, became the World’s first bank, the Bank of Saint George in the 1400s. But prior to that it had been a prison, with a very famous prisoner by the name of Marco Polo having lodging there. Fascinating stuff.

Reluctantly, I dragged myself away from the aristocratic neighbourhood. I decided to visit the port of Genoa which was once the main port of Italy. And what a glorious surprise it was.

As I’ve said before in previous posts, water views are always beautiful. And here is no exception. A great way to take it all in is going up the Panoramic Lift.

The Biosphere here is quite marvellous. It sits in the water and houses 150 tropical plant species inside. It is basically a large transparent ball and has become a symbol of Genoa. You can also go inside, but it’s not very big.

Tourist activities you can enjoy at the port

The ship is a replica of a Spanish Galleon and has been in various movies, such as Captain Hook (2011).

But my favourite feature here at the port is, you guessed it, food. Right opposite the marina is a classy food franchise called ‘Eataly’ (we don’t have it in Australia, yet!). It’s a gourmet eat-in, take-away, market, kitchen wares, deli, mega foodies paradise of Italian food!

‘Just leave me here’, I said to my family, ‘I’ll be fine, thank you very much; you guys go play’.

Unfortunately, they wanted to stay too, wouldn’t you know it.

This unusual looking thing here at the docks is artwork. What do you think of it? I’m still trying to work it out.

On my journeys through Italy, I have found it to be full of steep, hilly neighbourhoods and Genoa is definitely no different. You have to be an athletic walker; if you aren’t one already, you will become one here. So, be prepared with comfy shoes or you’ll be miserable.

The upside is that you can enjoy eating delicious Genoese food everyday – pasta, pesto, focaccia, cakes – and you will burn it off, thank goodness.

Speaking of which – a delightful cake shop/cafe called Mangini is located near the roundabout of Piazza Corvetto which I became very well acquainted with. Bellissimo.

Other interesting facts about Genoa:

A truly magnificent city. You will fall in love with Genoa too.

If you would like a guided tour of Genoa, here are some options I recommend.

Please leave a comment, if you wish to do so below. 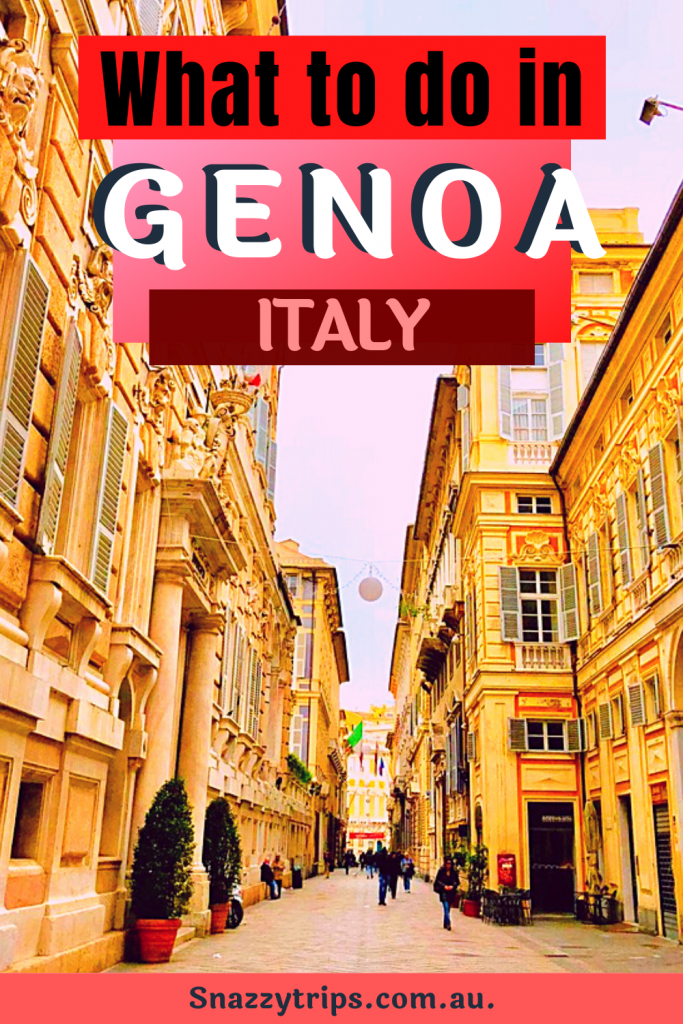 12 thoughts on “You Must Visit Genoa”