Any visit to the magnificent city of London has to include spending time at Trafalgar Square, one of the world’s most iconic squares. Being the largest square in the city and one of the busiest areas, it’s a popular tourist attraction to hang out, people watch, and visit some of London’s historic monuments. It’s also where you will see the famous red double decker buses constantly whizzing around.

There is much to enjoy here and I loved spending time walking through the Square, taking it all in. Being central to many other must-see sites is one of the reasons you can’t miss London’s famous Trafalgar Square. Read on for other awesome reasons, and things to see and do here.

Trafalgar Square opened in 1844 to commemorate the victory of the British Royal Navy at the Battle of Trafalgar which took place in 1805, and to honour the victorious Admiral Nelson who was killed at the battle.

Today, Trafalgar Square is a symbol of free speech and a cultural plaza for the people, where large events are a regular feature, such as cultural festivities, shows, photo shoots, protests, sporting celebrations and more. Chances are something will be happening in the Square when you visit.

Snazzy fact: A huge stepped pyramid was originally planned for the site of Trafalgar Square, in 1815. 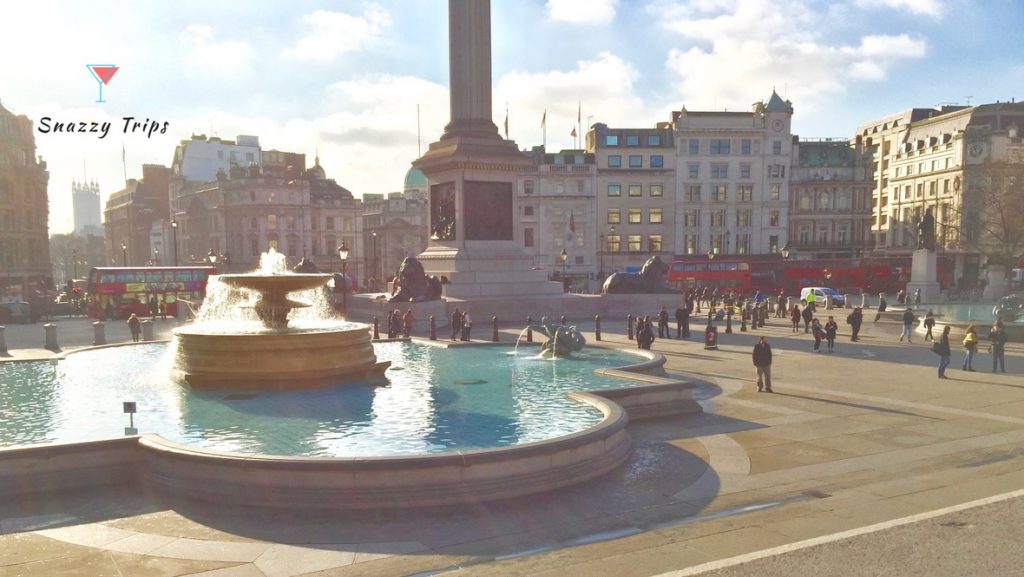 Where is Trafalgar Square?

It is located in central London in the city of Westminster, with several major roads leading to the large roundabout of Trafalgar Square. It’s just a short walk to Big Ben, the River Thames and London Eye. It is also an easy walk to Buckingham Palace, approx. 20 minutes.

Main things to See and Do at Trafalgar Square

1. Visit the National Gallery, one of the most visited galleries in the world, established in 1824. See famous art from the Middle Ages to the 20th century, such as works from Paul Cézanne, Claude Monet, and Vincent van Gogh. Tours are available for you here.

If you can’t visit at the moment, immerse yourself in this wonderful virtual tour, one of 3 that you can take from home.

(Normally you can see famous portraits at the Portrait Gallery, which is free, but it is currently closed till 2023.)

2. See the Nelson Memorial Statue and column, the centrepiece of Trafalgar Square. The Corinthian column measures 56 metres tall and the statue of Admiral Lord Nelson on top is 5 metres. Bronze reliefs of battles fought decorate the four sides of the pillar.

3. Admire the 4 huge bronze lions guarding the column, called the Landseer Lions, named after the artist. Each are 20 feet long and are very similar in appearance but all different.

4. Enjoy the 2 beautiful water features, with fountains and statues of mermaids, mermen and dolphins. See the fountains illuminated at night (top picture).

5. Check out the 4 plinths and their statues. Three have permanent statues upon them, one with King George IV, two with Generals. The 4th is an ‘arty’ plinth, used to regularly showcase a different contemporary art piece, changed every 2 years.

6. Go to St Martin-in-the-Fields Church, enjoy the free music they have often playing, there is a cafe and a shop there, and you can take part in the art of brass-rubbing in the crypt below. Brass-rubbing is an old English pass time and a fun family activity, and you get to keep your masterpiece, all for less than 5 euros. The Georgian church was built in 1726 and has a gorgeous white ceiling. Check their website for more details. 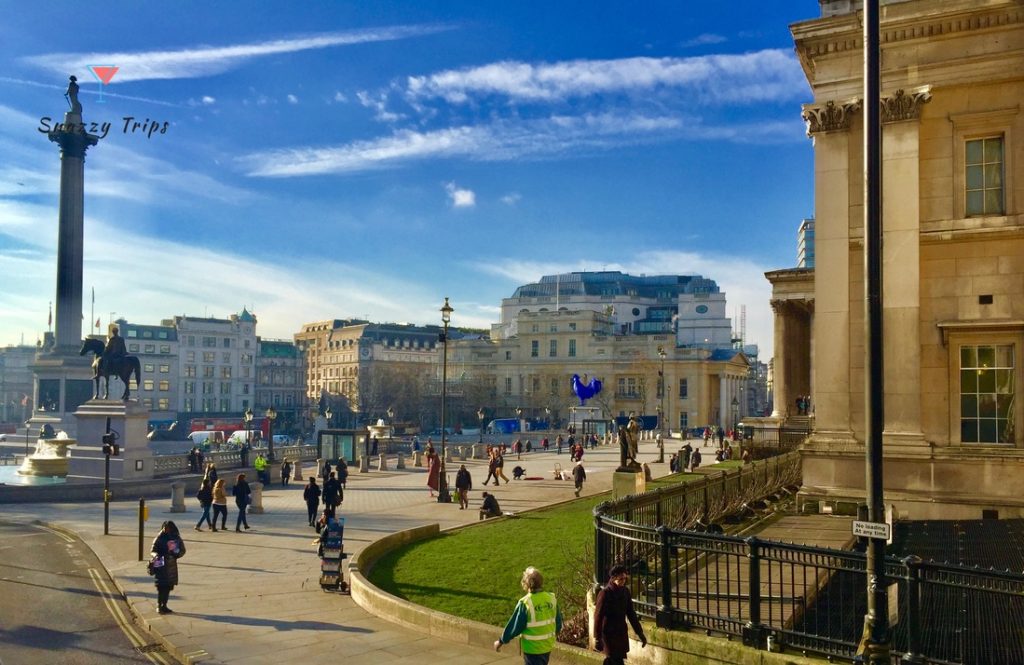 7. Marvel at London’s smallest police station, which was actually a police lookout erected before WWI, to watch over regular protests. It really is more of a wide, hollowed out, lamp post. Now, it’s just used as a broom closet by council cleaners.

8. Finally, there are numerous free events held at Trafalgar Square throughout the year that you can attend:

Snazzy fact: Trafalgar Square has featured in several movies – The Avengers, Casino Royale and Doctor Who.

Tours and Accommodation around Trafalgar Square

Planning a trip to London for the first time and...

AN ICONIC ENGLISH LANDMARK Any visit to the magnificent city...

THINGS YOU NEED TO KNOW  Going to London and wondering...

Should You See Kensington Palace?

THINGS YOU DIDN’T KNOW Buckingham Palace is a stunning architectural...