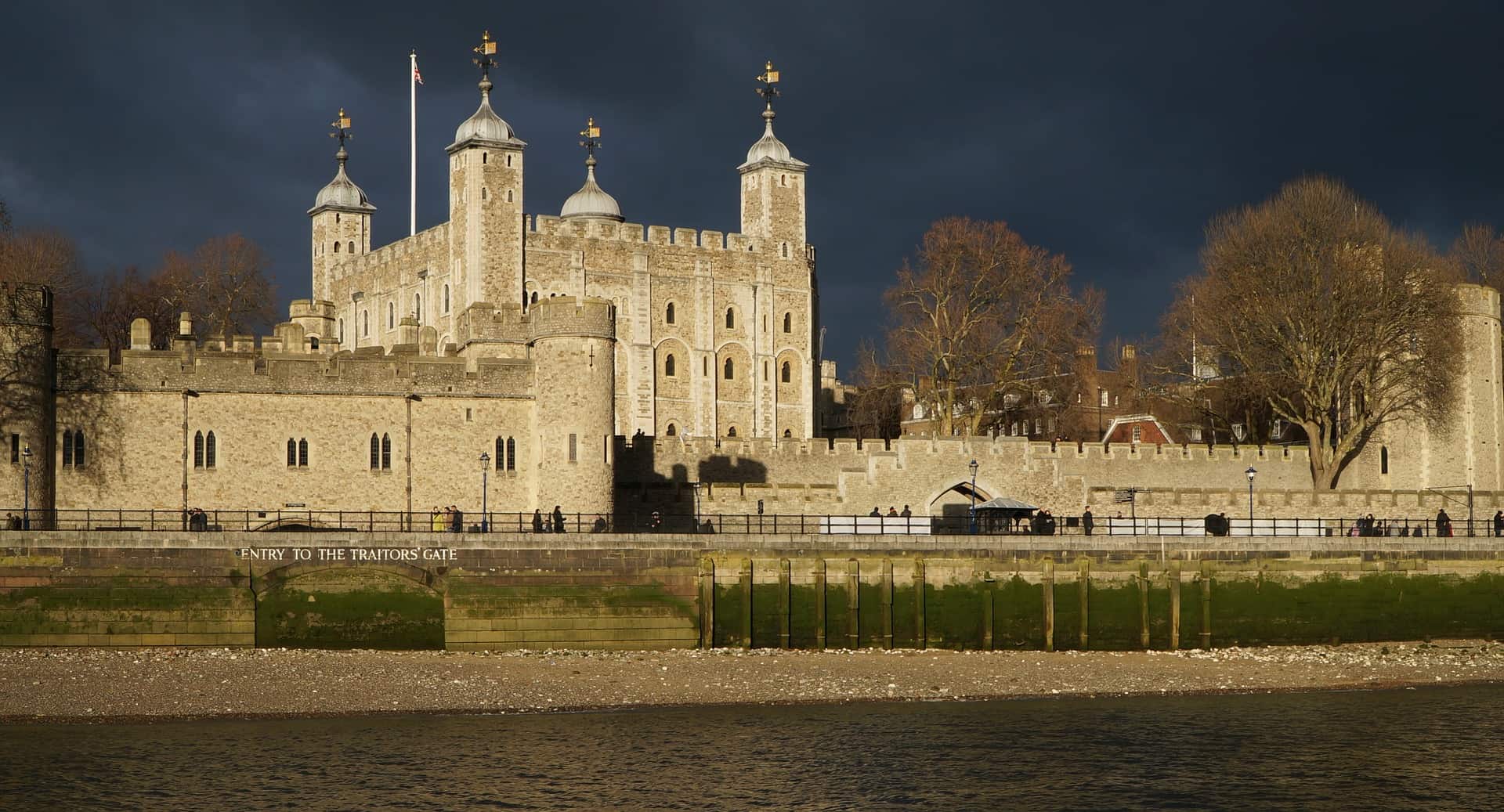 The amazing Tower of London is situated in the middle of the city, along the Thames River. With metropolitan life bustling all around it, this fascinating one thousand-year old castle and fortress, harbours spooky tales. You must see it while you’re in London. I’ll give you all the details to help plan your visit.

I drove around looking at it before working up the courage to actually visit. I know, yes, I’m a bit of a chicken. And of course being cold and gloomy, it seemed even more scary. But I finally decided to put my big girl pants on and venture in, not by myself, of course, are you kidding?

Thankfully there weren’t too many tourists being Wintertime, so my family and I walked straight in through the main archway.  But I felt like I was going back in time to a previous life that wasn’t going to end well.

However, inside the main courtyard it’s actually very pleasant. The central tower has been well maintained and is quite beautiful.

The Tower’s construction began in 1066 during Norman times and was designed to subdue and terrify Londoners and to protect against foreign invasion.

Over the centuries it has been used for numerous different purposes: a royal palace, a fortress, barracks, a prison, an arsenal, executions, a zoo, a mint, a museum and for housing the Crown Jewels, including coronation regalia, which are not kept at Buckingham Palace as one would expect.

So much going on in the one place, it’s unbelievable. If only the walls could talk. Formal history books don’t date back that far, so early information about the place isn’t accurate.

The White Tower in the centre of the whole castle is built as a fortified ‘keep’ and is probably why it was made a royal residence. It’s a lovely Romanesque style building that has white-washed features, hence the name.

The whole castle sits on 7 hectares, has 2 sets of walls around the property and a moat. There are also numerous towers, I counted 24 of them, drawbridges, 2 chapels and a huge dungeon. One of the towers is called the Bloody Tower! I can only imagine what sort of ‘bloody’ things took place in there. I have chills thinking about it.

In the past it was considered a status symbol by royals to have a menagerie of exotic animals for their own enjoyment. The Royal Beasts exhibitions included lions, tigers, elephants, monkeys, alligators and more. This went on for hundreds of years. But unfortunately they were often mistreated.

Many famous people were held captive and died here. Two of King Henry VIII’s wives, one being Anne Boleyn, whose ghost apparently wanders around at night carrying her head (scream). Two young Princes, brothers, 9 and 12 years old, whose bodies were never found, were assumed murdered by their uncle Richard III, after they were locked up in the tower instead of taking their rightful place on the throne.

Other people detained here were common criminals, clergymen, Jesuits and political prisoners. Some were put through excruciating torture for days, then executed. Others escaped and lived to tell the tale.

Here’s a fun fact for you: there have been 22 executions here.

Did you need to know that? Probably not, but there you have it.

These days the Tower is open as a Museum, showcasing historical artefacts from one of the most powerful countries in the world.

The displays include royal suits of armour from previous kings, horse statues, weapons, royal regalia and most notably, the Crown Jewels, which are the most popular attractions. And, yes they are the real deal. Unfortunately, no photos are allowed of the jewels (very disappointing).

Speaking of jewels, here’s another fun fact: do you know what they are estimated to be worth in total? Wait for it … Between 3 and 5 billion pounds! Yep. But the actual value of the crown jewels is priceless, of course. There are more than 23,000 gemstones, including the world’s largest clear-cut diamond. Want to know the size of that, for all you diamond enthusiasts like me? A whopping 530 carats. Ok, you can close your mouth now.

The Beefeaters, the ceremonial guardians of the Tower of London, are there to greet and guide tourists, However, they were originally for guarding the prisoners.

Fun fact: they were given their name because they were allowed to eat as much beef as they wanted from the King’s table.

The Grenadier guards are also on full display, changing back and forth as they do. Tried chatting to one, but not very sociable!

There you have it – why you must see the amazing attraction that is the Tower of London. If you need more reasons to see the tower, here they are:

I highly recommend a visit to this old castle and fortress, which will undoubtedly send a shiver up your spine.

I hope you have enjoyed my article on the Tower of London. Now, off to the tower!

Please leave me a comment about the Tower of London below. 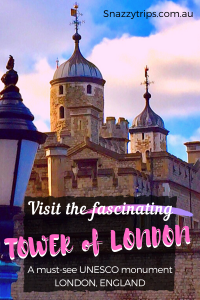 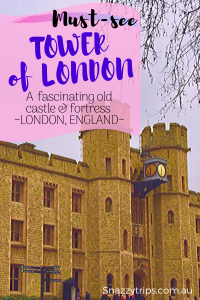 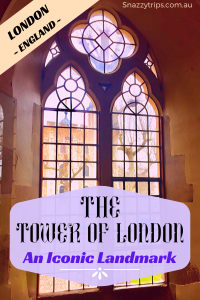 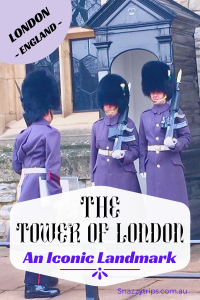 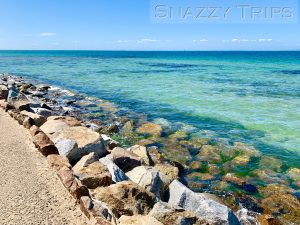 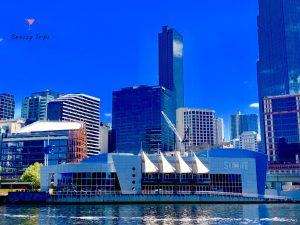 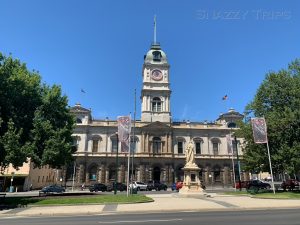 5 Best Things To Do In Ballarat 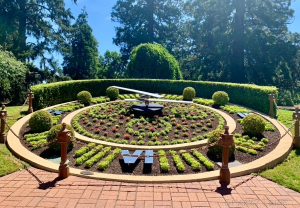 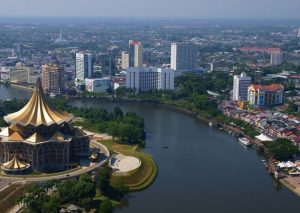 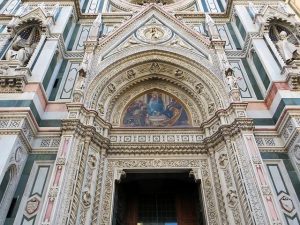 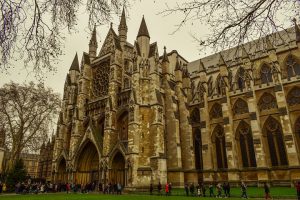 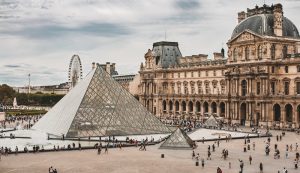 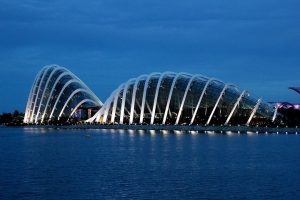 The Enchanting Cloud Forest Dome And Flower Dome In Singapore 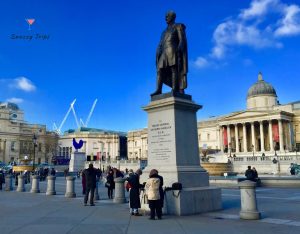 5 thoughts on “Visit The Fascinating Tower of London”