When in Paris you will undoubtedly see the glorious Arc de Triomphe in the heart of the city, a beautiful landmark symbolising the glory of France. It’s a site to behold and a major tourist attraction.

The intersection was designed in a star shaped formation, with roads radiating from the arch. When the arch and surrounding roads are illuminated at night, the whole area actually resembles a beautiful star.

The Arc de Triomphe is a gateway which connects the historic part of Paris with the modern city. It stands tall in the middle of the grand Champs Elysees, which runs from the Tuileries Gardens all the way to La Defense area.

Wherever you’re headed, you will see it. You can’t miss this famous French landmark protruding from the landscape.

You may also want to check out my article on The Eiffel Tower. Details Of The Arc De Triomphe

Modelled after the Arch of Titus in Rome, but twice as big, the build was ordered by Napoleon I to be built in honour of the French Army, their victories and Napoleon himself. It is what is known as a ‘triumphal arch’. Many similar triumphal arches exist around the world.

Begun in 1806, with the first stone being laid on Napoleon’s birthday, August 15, it took 30 years to build, but he never saw it completed.

It is 50 metres high, with big and small arches all the way around and a high vault. It is the 2nd biggest arch in the world, after North Korea’s.

Decorated extensively with sculptures and friezes of the Revolution, war victories, names of battles fought and French generals. A proud symbol of French glory.

Under the Arc de Triomphe lies the tomb of the unknown soldier which honours all soldiers lost in the wars. An eternal flame burns.

Pedestrians hopefully use common sense and don’t attempt walking across the busy roundabout. Instead, use one of the 2 underpasses provided to get to the monument.

These are located at the Champs Elysees and the Avenue de la Grande Armee.

Walking around the base of the Arc de Triomphe is free.

The Top Terrace of The Arc De Triomphe

The terrace above is accessible by stairs, and an elevator part of the way. You have to pay a fee to visit the top. Check details here.

It offers panoramic views of the city and a small exhibition detailing the history of the arch and its features.

Snazzy Tip: I highly recommend you go up to the top of the Arc de Triomphe and admire the panoramic scenery from the terrace. You get 360 degree views of Paris from up here and you will enjoy spotting all the other famous landmarks. Not to mention, the thrill of watching the orbiting traffic below. You won’t regret it. You can thank me later.

The huge roundabout circling the Arc de Triomphe is probably the most famous and the craziest in Europe.

In the middle of it stands the triumphant monument that hoards of tourists want to visit every day. Sound like a safety nightmare.

It has a width of 10 lanes and 12 thoroughfares leading to the landmark at the heart of the capital. But why did they build 12 roads, I wonder. For horses it would have been ok, but for cars and trucks, it’s impractical to say the least.

There is an enormous amount of traffic manoeuvring around this iconic tourist attractions, with seemingly no rules and no line marking.

It is indeed a triumphant feat to successfully drive around the circle and get out of it in one piece.

Thankfully we made the right decision not to drive, and opted for a bus instead.

If you are mad enough to drive the roundabout, nothing will prepare you. But be warned, there are no line markings, so cars veer wildly all over the place, and you have to give way to those entering from the streets. A very weird rule indeed.

It was stressful enough just watching the traffic.

Events At The Arc De Triomphe

If you a lucky enough to be here in May or August you may be able to see the amazing spectacle of the setting sun directly through the arch, which apparently only occurs twice a year.

Two well known assassination attempts have been made here against French heads of state.

Many events and parades are regularly held here such as the Bastille Day Parade each year and the Tour de France Finish.

Be sure to visit the Arc for yourself when in Paris.

You won’t need to allow more than an hour if you are going to the rooftop.

Let me know what you think. 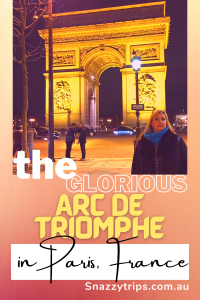