Located in New Delhi, on the banks of the Yamuna River, is Swaminarayan Akshardham Temple, India’s most beautiful Temple. It’s beauty is mesmerising. One of the most unique structures in the world, it is also the largest Hindu Temple in the world. Therefore, you must visit this spectacular Indian monument and cultural estate. I consider it to be one of the highlights of Delhi.

Bhagwan Swaminarayan (1781-1830 Common Era) is the inspirational and spiritual leader whom the Temple honours. He was instrumental in making huge changes in Indian society, relating to social reforms, the poor and helping to advance women, amongst many other things.

Opened in 2005, it took 5 years to complete the build, with over 10,000 workers contributing to the enormous task. The site spans 100 acres of land.

It’s a modern-age construction, but built in traditional Hindu architectural style, with an ancient appearance.

The whole structure is made of pink Indian sandstone and Italian Carrara marble. It is absolutely magnificent and I couldn’t stop looking at the amount of detail in the intricate carvings of the statues which adorn the whole exterior, from top to bottom.

An enormous amount of work by the craftsmen has gone into this impressive monument. The Temple is decorated in elaborate sandstone carvings of some 20,000 deities and mythical creatures. Furthermore, life-sized elephant carvings surround the outside, all the way around. They are gorgeous.

Outside in the grounds there is a huge set of marble footprints inside a water fountain, symbolising the holy man’s mark on the world.

When you enter up the main steps, the interior of the main Temple is even more luxurious, with intricate gold embellishments.

The guru’s gigantic gold statue adorns the centre of the shrine. You certainly won’t miss it. He sits at several metres tall and is aided by his spiritual gurus around him. It is stunning and a feast for the eyes. You need to take your time here to appreciate the magnificent detailed artwork.

A huge central dome stretches 43 metres high, and there are several other domes of varying sizes.

The complex was designed to become a landmark of India, a recognisable monument the world over. I’m sure it will achieve that aim in the near future, judging by the popularity of the place already.

Things to do here

This Temple is so much more than just a place of worship. There is a lot of fun family friendly things to enjoy.

It really is like an entertainment venue. It’s more of a theme park than a place of worship. In fact, that was the intention of the designers of this Temple – to make it something special, like no any other Temple in the world. I think they have succeeded.

India’s most beautiful Temple is a huge attraction for families and people of all ages, not only to pray, but also as a social outing, a date place for young couples, and a tourist destination.

Bus loads of people descended on the site when I was there, from all over the country, to visit and bask in the festive atmosphere. I was overwhelmed by the crowds arriving to visit a temple! I’ve never seen anything like it.

We were guided in an orderly fashion through the aisles and security checkpoints, with separate lanes for females and males, as is common practice in India. I have to say, I’m not a fan of being left on my own in a long queue of foreigners. Males had to remove belts, females had small purses checked. It’s no surprise the enormous crowds require airport-style security.

Being unable to take photos here was a real disappointment for me, as it’s such a beautiful Temple.

I have been to other Hindu Temples and have been allowed to take photos. For example, the Batu Caves Hindu Temple in Kuala Lumpur, Malaysia.

The only photos I did manage to take of Akshardham Temple are of the exterior from quite a fair distance away, which I was not happy with at all.

However, there are professional photographers set up on the premises for you to have your photo taken with the shrine in the background, and purchase if you wish.

Snazzy Tip: Best time to visit the temple is late afternoon, so you have time to stroll around the complex, then see the light show in the early evening. Allow 2-3 hours.

Take a tour to appreciate this magnificent Temple

Have you seen India’s most beautiful Temple? What do you think of it? Leave me a comment below. 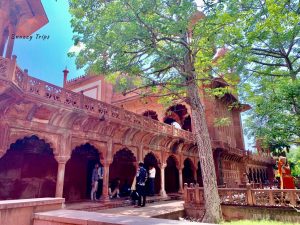 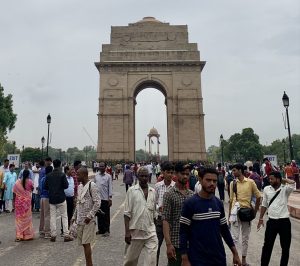 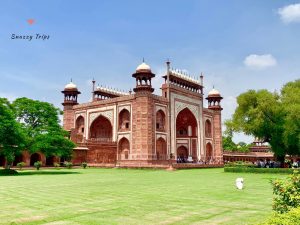 What NOT to do in India 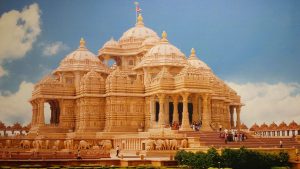 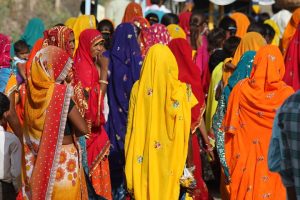 15 thoughts on “India’s Most Beautiful Temple”